That time I just turned 30.

Last Thursday night, in my final hours of being 29, I started to panic a little. But then I woke up on Friday morning and Noah had two of my favorite chocolate bars balanced on the counter with a Wonder Woman Little People car balanced atop them and a lovely card also featuring Wonder Woman inside which he compared me to Wonder Woman in both awesomeness and looks, so everything turned out fine.

On Friday afternoon, Noah's bestest buddy in the whole wide world—Ben, his miraculously randomly assigned college roommate—came to visit for the weekend. We hadn't seen him in like 7 years. He'd never met either of our kids! And it was fantastic. Didn't miss a beat. Also, he brought me a handcrafted mug from the Puffy Muffin for my birthday, and while he was here he bought us a Madeleines pan and made some. So. Isn't it obvious why we offered to convert the office into a bedroom so he could come live in it? 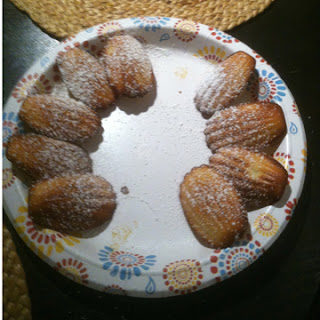 Casual celebrations with good friends (there were others; hi Heather! Hi Wes! Hi Nick!) and family. Just exactly the way to go, in my opinion.

I appreciate TV and film, I really do, but the past few years I've just washed my hands of all the crap that goes along with it: commercial breaks, really terrible "reality" TV, stupid random pilots for DOA sitcoms, other random stupid programming, etc. We've only had Netflix for years now, and it works just fine. But still, I'm further culling the herd, if you will, and finding alternative family activities. So instead of watching the same two seasons of Dinosaur Train for the fifth time (WHEN IS THE THIRD SEASON COMING OUT PLEASE PBS I BEG YOU), I've been suggesting activity books or art or other things I make up like "treasure hunts" where I have Ethan search the house for items like diapers, Legos, and costume jewelry.

Finally, though, because of the big 3-0, I had a little cash lying around, so I went out and bought Settlers of Catan. I've had a few friends mention it (Dan, my friend Jess, Jack Donaghy) and I thought, let's bring some good ol' fashioned family fun back up in here with a board game.

Noah, Ben, Ethan and I played it—it was somewhat challenging for a 5-year-old boy, but not so challenging that he didn't immediately pick up on the wheeling and dealing aspect of trade. Ethan ended up winning that first game, reaching 10 Victory Points as fast as I could possibly get him there once his attention started to wane, with the help of me giving him resource cards in exchange for kisses, for example. 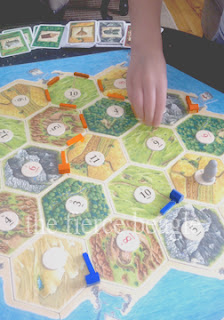 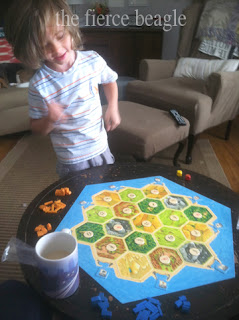 The next morning, he and I set up the board game again first thing—setting up board games is exactly what I want to do at what feels like dawn, by the way—so we could play, just us two. The game went a little differently going by Ethan's rules. For instance, he was the only one who could move The Robber around and steal resources from the other players; he controlled all the wheat, ore, and brick resource cards right outta the gate; and finally, I was permitted to roll the dice, but after doing so, "nothing happens." So. Birthday money well spent!

In conclusion, Oliver had his first Oreo this week. 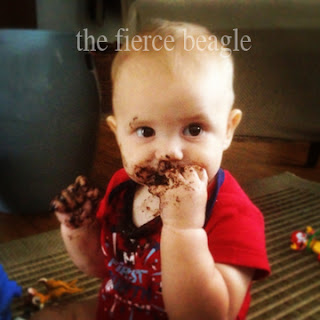 Happy birthday! Your 30s will be fabulous - I know because I can see into the future :)

Happy 30th! Love that there were Wonder Woman details...so awesome. Doesn't every girl want to be her? ;)

I love Settlers of Catan! I can't wait 'til my little boy is old enough to play it with me!