Our first foray into organized sports, and I tried to fight only three people

Baseball camp. What can I say about Ethan's first baseball camp? We learned so much: keep your glove down, use two hands to catch, 5 year olds are fairly clueless. Valuable lessons all.


Ethan had fun, but I had a really hard time unclenching. Like when he left his hat and glove in center field while his entire group ran to home plate, and I saw his team leaders counting the group like three times but failing to notice his missing hat and glove. Or when he was so busy playing in the dirt behind home plate that he lost his place in line and ended up being last for the base running (he didn't care; I cared). Or how he kept forgetting to tell the players he bats lefty (even though he's right handed) and he'd take a swing and whiff horrendously because he was set up on the wrong side of the plate.

He only had one run-in with one kid, who hit him because he put on that kid's batting helmet, and even then he didn't fight or anything, he just said "That kid was being mean." And I was all, "Yeah, don't worry about it" but inside I was all, "That kid is a punk and I would throw a glove at his face if he was in range." Like this:

Of course I saw that kid doing something really funny yesterday (dancing HARDCORE to "Call Me Maybe" being played over the loudspeaker), and I remembered that kids are kids, even when they're turds.

Ethan was definitely one of the youngest kids at baseball camp, but he's so happy-go-lucky that he didn't even seem to realize that most of the other kids had an idea of what was going on. I have video of him running the bases for time and slowing down in the home stretch to wave to some friends. I also witnessed him chatting up the pros—talking shop before his turns, playing around with them over lunch, apparently challenging one of them with some kind of dare, to which the player shook his head and said, "I'm not going to do that"—with no concept of what it means that these guys play a sport. For money. For the Chicago White Sox organization.


He also became good friends with a kid named Brayden and his older brother Cy, who moved here from New York in December. Brayden won the award for the fastest/best/most accomplished 5 year old, and there was zero braggadocio out of him nor any jealousy from Ethan. And Brayden pounded gloves with Ethan after every activity, even if Ethan didn't catch a single fly ball, for instance (a couple times one went in and popped back out).

It was like the time he did the Easter Egg hunt in Florida and ended up with one thing of bubbles and a leaf. He didn't care. He was satisfied. I guess I need to try not to ruin his attitude with my desire to shower him with accolades, even unearned ones. He doesn't expect or covet any, which makes him more enlightened than his mother. 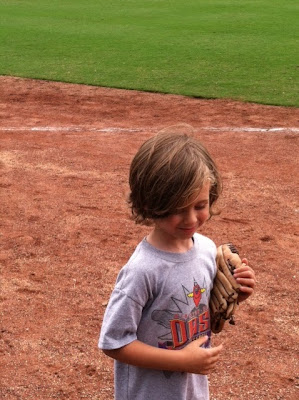 He's just an adorable wee boy and his Nana thoroughly enjoyed watching him 'stretching' and 'rolling' in warm-ups and doing a wee hip shake here and there when he was getting antsy waiting his turn. I'd have to say he the cutest 5 year old I know!

He is the SWEETEST. And I might have gone a little ragey on some "big kid" who was bouncing my biggest baby too hard on the seesaw today. "TOO HARD! TOO HARD! STOP THAT! HE'S TOO LITTLE FOR BOUNCING THAT HARD! (YOU DAMN FOOL!)" (words in parentheses were omitted but definitely were said in my head.)
I will never survive a sports camp or the first day of school or anything that requires letting go.

We played tball in the spring and it was so painful. There was a lot of daisy picking and waiting for snack and that is about it.

And we looove Mr Universe. The first 20 minutes about parenthood kills me every time. 'Bedtime...it's chaos"