I've been feeling super wiped out lately, more than I should be considering Oliver sleeps from about 8:30 until at least 4:30 then goes back to sleep, but then I realized I've forgotten to take a vitamin for the past, oh, five-ish months. And the doctor told me I was low on iron way back then, so that explains my intense desire for Hardee's burgers as well as the fatigue. Oops.

Ollie is doing what infants do, namely growing way too fast and sleeping way less than desired (not to say he's a bad sleeper; it's just Mommy would love to keep her eyes closed for 8 hours straight). 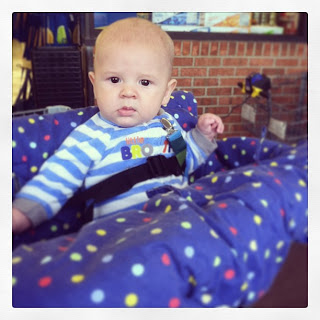 Ethan is hilarious and challenging and quite the philosopher ("Ah, life is good!" he sighed from the backseat of the car this morning). At this moment he and his friend Leah are in the backyard playing, and they just came in to ask if I could give them a shovel so they could dig up some grass. And I'm all, do you kids have any idea how much money we've put into that turf? But then I'm like, Your Diego-themed shovel is over there. Because I'm too anemic to care. Or maybe it's just happiness. 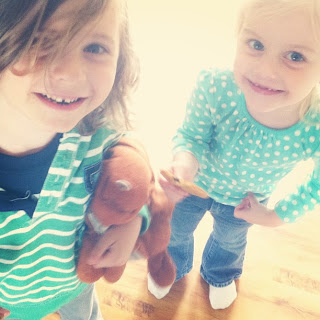 We're starting the work on ours. And by "we" I mean Nick. And by "work" I mean some attempt to turn this postage stamp of grass into an aesthetically pleasing place - a project that is somewhat hampered by Molly's new love for flowers... and the abundance of dandelion weeds we have growing in the yard.
"Mama! Molly house have BIG LALLOW FWOWERS!"
No human with a heart would kill these things at this point.

Your boys are adorable. Just for the record. I'd love to see a picture of Ethan playing with/holding Oliver, if you take requests.

I second Jodi's request. Oliver's expressions kill me. I just wanna pinch him!