They're animals, I tell you

I've been feathering the nest, and part of that includes going through eleven (!) giant bags of Ethan's old baby clothes. It took two afternoons to sort through them all, dividing them by size, then folding and storing them in large plastic bins to go back in the attic. I even applied labels so as the baby gets bigger, we can easily grab the bins and bring them back down for his size/age.

During the first afternoon of baby-clothes sorting, Bonnie and Cody defaulted to their essential personality traits: overly enthusiastic and moody/confused/worried, respectively. Bonnie romped and frolicked through the piles, treating our living room like a timed miniature horse-trials course. Cody, on the other hand, tiptoed around the piles as though they were land mines, gave lying down on one of them a half-hearted try, then retired to the office to chew his toy in complete darkness. 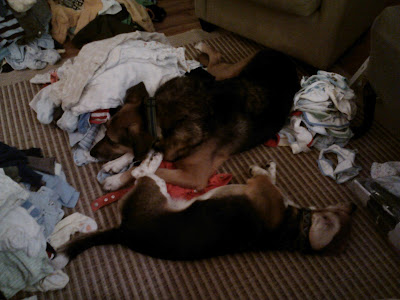 Yesterday, the second straight day of thunderstorms, further upset the dogs. And by the dogs, I mean mostly Cody. We spent much of the morning and early afternoon at Noah's parents' house (he's tiling their bathroom floor for them), leaving Cody without any humans to shadow/treat as a protective lightning rod. By the time we got home, the dogs met us at the door, ecstatic.

But isn't that what dogs do? you might be asking. Most dogs do that, yes. Bonnie does, for instance. Cody, though, usually waits in our bedroom in his dog bed, where we have to go and find him, then pet him and baby talk to him before he'll get up and join the family.

So it was unusual for both dogs to greet us. As we moved through the house, even more unusual tableaux presented themselves. Using my powers of deduction, I came to the conclusion that Cody thought what with all the baby clothes sorting and the thunderstorms, we were never coming home again and it may well have been the apocalypse. "So what the h3!7," I imagine him thinking.

Half the trash was pulled from one of the bathroom trash cans. Dirty clothes had been taken from the hamper and strewn about our bedroom. One of Ethan's nighttime underpant devices had been taken to the dog bed and shredded. A bag of baby/toddler shoes in the office had been literally ripped open in several places, and random shoes were left scattered throughout the house.

I can only imagine what it'll be like when the baby is actually born. Heaven help us if it snows that day.
at 4.9.12