For two months, Noah's police car has sat in our driveway, unused. Owing to somebody's snafu regarding paperwork that has yet to be resolved, Noah's been unable to carry his gun since returning to work. No gun = no drivey police car. Because it turns out when you drive a police car, people expect you to do policeish things, which simply can't be done without weaponry.*

*Although Noah's been taking Krav Maga, so he insists his limbs are now weapons.

Since we only have one car, this posed a problem. Because there's no way I'm getting me and Ethan up to drive him to work and pick him up everyday, 24 miles roundtrip. Plus, one weekend a month he drives to the next town over to work for the Navy, which is about 50 miles roundtrip, so nuh-uh.

While my brother was still home for the summer, I was able to use his car. A Chevy Cavalier that sounded weird, smelled funny, and sports a Jimmy Johns bumper sticker. In short, exactly what you'd expect from a college guy. What concerned me most, though, was the thick layer of change Mod Podged to the console, mostly because I know for a fact he doesn't use Mod Podge for anything, so who knows what was really acting to shellac that seven dollars in change to the dash. I really don't want to speculate.

But, as college kids are wont to do, Kyle returned to school for what he as a fifth-year senior likes to call his Victory Lap, so we were back down to just the Ford Focus. Until two days ago.

We used to have The Beast, which was like driving a luxury tank, and I'll admit I surely did like it. But after I quit my job and we sold the car we still didn't own outright, it became silly for our only family car to be a Dodge Ram 1500 quad cab.

It's important to know that although police officers are widely different personality-wise, there's one thing they all have in common: expensive toys and hobbies. Show me a police officer who doesn't own or aspire to own a motorcycle, a boat, a truck, a jet ski, or some combination of those, and I'll eat my hat.

So one of Noah's coworkers was selling (one of his two) truck(s) so he could buy a fishing boat (<--See what I mean?), and seeing as it was actually and miraculously in our price range, Noah went for it.

Allow me to introduce you to Senior Chief Buckshot: 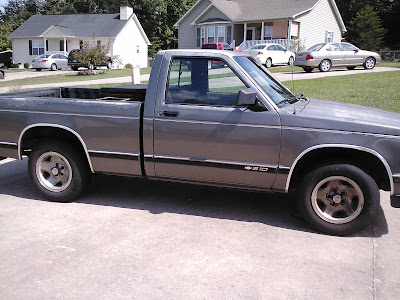 It's everything an old truck should be: well-maintained, reliable with a good motor, old enough to drink, and likely to give you tetanus. Senior Chief Buckshot has 100% more towing capacity than our Focus (although our Focus has 97% more paint). Naturally, Ethan loves it almost as much as Noah does. 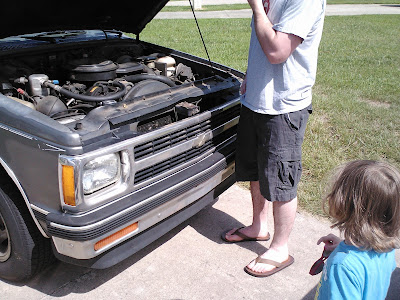 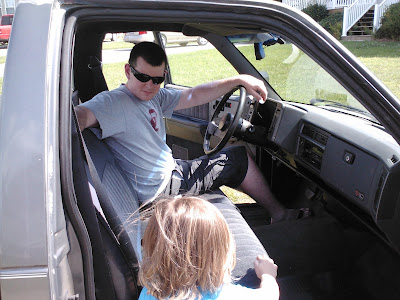 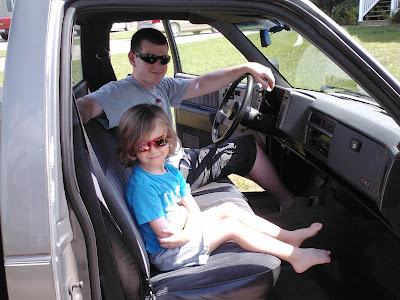 Yes! We are definitely pimpin ol' buckshot to Krav Maga in the near future. I just can't believe he hasn't picked me up yet so that we could go "looping".

The identical expressions of satisfaction in that last picture are priceless! Cool truck guys, I like it!

My dad used to have a silver chevy s10!!! It was my favorite! It was a bench seat too!