Last night, just after midnight, my brother-in-law and sister-in-law dropped of my nephew so they could go have their daughter. I got to practice getting two children to sleep (albeit several hours apart), dealing with little sleep, and seeing what happens in the morning. You know what? It hasn't been bad. Plus, look at this: 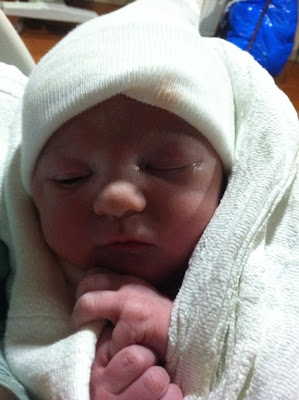 However, Noah's early morning stealth mode needs work (he was doing well until he kicked a stainless steel dog bowl and almost brought down an entire shelf of water bottles while grabbing a travel mug).

Our animals, incidentally, don't have a stealth mode.

My little one has been moving around definitively for a couple of weeks now—in fact, next Thursday we get to find out "the sex, or gender," as my brother would say. I predict it's either a boy or a girl.

In other news, we already have a new addition to the family: 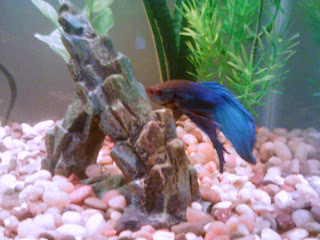 So far I really enjoy having a fish tank: We got the tank over the weekend, set it up yesterday, and Ethan insisted we transfer the fish first thing this morning. I hope the nitrogen or ammonia or whatevertheheck is balanced already, because there wasn't any use saying no to Ethan this morning; he was already outraged because 1) When he woke up, Big Bunny was on the floor, and 2) When he woke up Grayson was here, both of which were personal attacks against his worldview. Besides, I can think of nothing better to do before 9 a.m. on six hours of sleep than yoink a struggling betta out of a small tank with a net and assist a four-year-old in transferring it to a big tank without killing it. It's very peaceful.
at 10.7.12

We met Princess No Name in the middle of the night (I had taken a sleeping pill before Nick and Jen called so I was struggling), and she is adorable. I hope she is going to look like her big brother because he is beautiful. (I think she already DOES look like Grayson!) Mimi

6 hours sleep!!!!! Geepers I remember you practically sleep walking to school when I came to visit and that was after probably at least 9 hrs sleep!!!! Hope you and bump are keeping well! Sue xoxo