Some evolutionary snafu has led many North American parents to cross the line from Protecting Your Young to the dark side: Sabotaging Other Young On Your Young's Behalf.

'Twas the day before Easter, and we were taking Ethan to a giant Navy-sponsored egg hunt extravaganza at a nearby recreation area. Unfortunately we got turned around and were five minutes too late for the 4-year-old hunt. The place looked like District 12, with a few dazed-looking preschoolers staggering around the barren landscape, by the time we arrived.

Just as the mother tigress secures meat for her young, I suggested we sneak him over to the 5-year-old egg hunt.

As we stood there waiting for the hunt to officially start, eggs and other small toys scattered tantalizingly behind the magical Do Not Cross yellow tape barrier, other kids started filling in around us. I swear to you, there were a couple kids in 11th grade based on their size and weight. One kid right next to Ethan, a Goliath at nearly a head taller than my kid and about five pounds shy of my weight, had a super obnoxious older brother who kept yanking at the line, giving Gigantor tips on take-off technique ("No, put your leg back and lean forward, like this") and which loot to grab first.

I had nothing against the giant five-year-old. I hear one of my uncles once was one, and because of his size people often expected more of him than was age-appropriate. But the older brother, he was the one for whom I had daggers. And their mother, who stood idly by, occasionally telling them to let go of the yellow tape, which they'd stretched nearly a yard into the playing field.

That's when I heard the older brother counsel Gigantor to go for the small stuffed elephant nestled in the roots of a tree in front of Ethan, a small stuffed elephant Ethan had been patiently eyeing for 20 minutes. This kid, I swear to you, will grow up to be a villain in the vein of Evil Sensei from Karate Kid, a Joe McCoy of some high-school football team, a Sue Sylvester only without a heart. He'll say things to his young mentees such as "Sweep the leg," "No mercy," and "I am engorged with venom and triumph."

"Now Ethan," I said loudly, "remember to be nice to other kids. There's plenty to share." As if my kid needed that little sermon on the mount! "But," I whispered into his ear, "Go directly to that elephant. Now what are you going to get first? The elephant, right. ELEPHANT."

As soon as the master of ceremonies announced the start of the hunt, Noah and I in our overprotective enthusiasm each nudged Ethan on the back, causing him to lose his footing on the leaf mulch and fall flat. It all happened in slow-mo, me leaning over to help Ethan up, glancing over to the tree and seeing Gigantor lumber up and snatch the prize from our grasp.

Seconds later Ethan was up and running aimlessly through the melee. Noah and I split up to keep tabs on him from the sidelines, and after just a couple of minutes he came limping over, huffing heavily, with nothing in his bag but two eggs, a small jar of bubbles, and leaf. 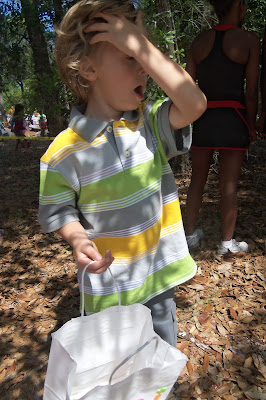 I.... Love this :) (except for the part where Gigantor got the elephant. That part sucked. But trying to sabotage the evil elder child is pretty priceless.)

I felt like I was reading a chapter in the hunger games. Too bad I wasn't there to help out ethan. trust me i would have hit that gigantor in the neck with a tranq.

It's a good thing I wasn't there because "Teacher Debbie" would have emerged, and you know how she can be. It's also good that Sharon was in NC, because she and I would have attacked those kids and then their parents!

Go Ethan! I am with him; those things are exhausting. And, I am sure mom and dad delivered anyway.

We stick to backyard egg hunts. Which keeps them entertained for hours (rehire and rehire).

Jenn—I'm sure every mother has experienced this at some point. I only wonder what it must be like to be the mother of a potential bully.

Kyle—I know. I actually felt bad for the five-year-old, because his brother was turning him into the stereotypical huge kid who picks on other kids.

Mimi—We could have used a dose of Teacher Debbie, or even Deborah Etheridge Vacation Club Member. I don't even want to think about my mom. She would have probably thrown a stick in the way of the other kid to trip him up.

Slam—We've only ever done at-home hunts before, so none of us were prepared for the maelstrom.

Oh Erin I read this and laughed...and cried a little maybe. The first time I went with London to the big 107.5 Easter Hunt at the farmer's market, we were behind that rope, basket in arm, and the rope drops....London stood there clenching my pants. We didn't get a SINGLE EGG. Instead we purchased grilled and buttered corn and sat in the grass and had a picnic. Fair trade, fair trade.

I enjoyed reading your articles. This is truly a great read for me. I have bookmarked it and I am looking forward to reading new articles.

Lots of Good information in your post, I favorited your blog post so I can visit again in the future, Thanks.

I found your website the other day and after reading a handful of posts, thought I would say thank you for all the great content. Keep it coming! I will try to stop by here more often.