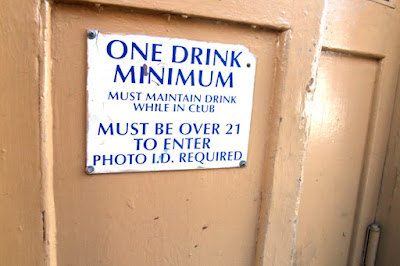 Last weekend I went to New Orleans with my friend Aubrey, one of Noah's shipmates. She and I had a grand time, which I'll share more about later, but I thought a couple of parables could help set the scene.


Mom, via text: Be careful on your trip, won't u?
Me: No i'm going to be reckless
Mom: I dont want u getting arrested and noah being thrown out of the program
Me: I'm planning on flashing my boobs as often as possible.
Mom: U wait until ethan is a teenager and u r worried sick when he's out and about. What goes around comes around
Me: I'm not a teenager. I'm nearly 30
Mom: Look before u leap
Me: Thanks for the advice. How much beer is too much?

Mom: It doesn't matter how old u r you r still my child. The fruit of your father's loins.
Me: That's gross. Shut it down.

Moral: Other than during Mardi Gras, most retailers do not accept boob flashes as currency, but maybe not even then.

Me, via text: I am trying to find a place for a discreet no 2 but this city is teeming with people
Noah: Dont they just do it in the street sometimes?

Moral: Actually, I think so.

"the fruit of your father's loins" - i'll save that one for when my kid down the road :)

eToro is the ultimate forex trading platform for rookie and professional traders.