The pack is diminished, for a time 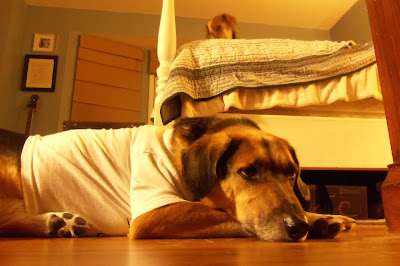 Last month: Cody wearing one of Ethan's t-shirts, because I was told his being wrapped tightly might help his thunderstorm anxiety, like a baby being swaddled. Meanwhile, Bonnie licks the bedspread.

Tonight we took Bonnie and Cody to our friends Kim and Susan's home, where the dogs will be living while we're away in Florida. Kim and Susan have three wonderful kids and a good amount of property, and the dogs were incredibly excited to be there (they've stayed with this family before). I didn't realize how much I'd miss them until we were leaving and I glanced back, and there was Cody's little face with his innocent, neurotic, shining eyes watching me go. 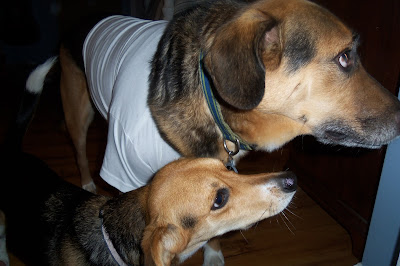 We were literally steps outside Kim and Susan's door when the waterworks started, and it was only seconds later, when Noah said, "It's okay, let it all out," that the floodgates opened and full-fledged sobbing took over. 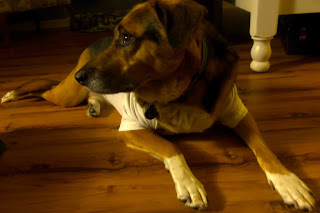 Cody, unsettled by a clap of thunder. 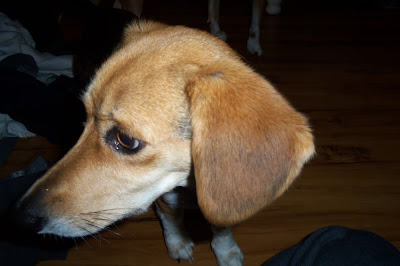 Bonnie, never unsettled, for she is perpetually enthusiastic.

Without Cody, I'll have to make do with Noah's far-less-furry-but-astonishingly-Hobbitlike feet to tuck mine under for warmth at night. Without Bonnie, I'll only have a lifeless, furless pillow to spoon in the early morning once Noah's left for work. 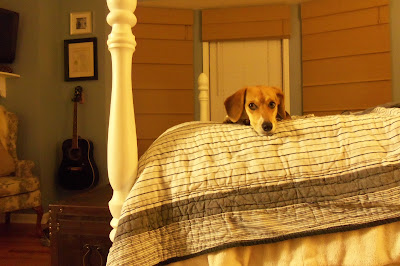 Totally over it re: Cody's personality disorders.

Great photos, Erin! These two babies will be waiting for you when you get back, like you went to the grocery store.

I completely understand! I hate leaving my dog for any reason. You have a very good reason and you are so lucky to have such great friends with a great place for them to stay!

i'm catching up on blog reading...so obviously this comment is rather late.

i completely understand & basically break down in tears when i have to leave our pups when we go on a trip. even for a weekend. i don't realize how attached i am to them until we go somewhere.

oh and the swaddling shirt for dogs? called the thundershirt. it's expensive but seemed to help our anxious pup on the trip over here. we buy more stuff for our dogs than ourselves. i wonder what will happen when this baby arrives.