"Did you see Noah?" my mom asked when she arrived a few minutes after I was escorted to the section for families of award winners.

"No," I shook my head sadly, "they said after the ceremony."

She smiled. "He's standing right behind you."

He was standing at ease with two other award-winning recruits next to their division sign, and I walked right past him without even realizing it.

Even an award-winning sailor couldn't keep intact the 1,000-yard-stare feature of his military bearing when he saw the look of shock and surprise and excitement when I turned to see him standing there. 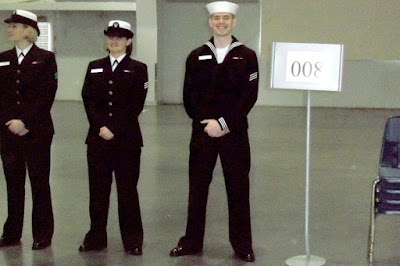 The ceremony was filled with impressive military displays—including an awesome drum corps—and when Noah was recognized as "the finest sailor" of all 269 graduates, that he was the one who best exemplified and excelled at the Navy core values of Honor, Courage, and Commitment, that every aspect of his time at RTC Great Lakes was marked by excellence—well, all I could do was look back at my mom and beam.

While the others were escorted to a hallway to await their reunions with their sailors, I and our family were taken down a separate hallway, where Noah appeared minutes later. I'd like to say I was overwhelmed with emotion, but I was really just overwhelmed. The emotion came later.

Our family alone was brought into a room filled with a whole lot of Navy brass. Noah introduced us to each one, then we witnessed a private presentation of a wristwatch, two commemorative coins from two different officers, and then, another award. The captain presenting the award called it a "flag letter of commendation," which sounded great, but the Rear Admiral present took a moment to explain that this letter is special because it's signed by a flag officer—a very, very high-ranking navy official—and that in 30 years she'd only seen about 20 of these given out. Um, WHAT?!

When Noah was granted liberty after the graduation, his discomfort was obvious. After following scrupulous rules for 9 weeks about everything from how to walk to how to talk, meandering down the sidewalk and chatting was awkward and even nerve-wracking for him. This, after all, is a guy who for the past 60+ days has eaten all his meals in 12 minutes or less, a guy who has stood in line naked with over dozens of other naked guys waiting to take a 5-minute cold shower, a guy who irons and folds his underwear and stresses over the orientation of his bed pillow.

I, on the other hand, am now a lady who has been a single parent, has kept a household relatively clean and functioning alone, who has been up to her shoulder in a storm drain, who has fostered friendships as an individual instead of as one-half of a couple.

We'd both dreamed of our reunion for weeks, but when it actually happened, we didn't quite know what to do, how to talk to each other. For the first several hours, the most comfortable Noah appeared to be was when he was demonstrating proper t-shirt folding technique. 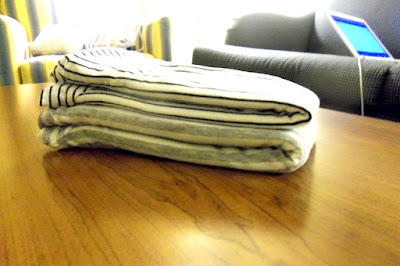 In the afternoon, my parents and brother went out shopping and Noah's family took Ethan to go burn off some steam, leaving us alone for awhile. We settled in to listen to the new Coldplay album and after just a few minutes ended up crying in each other's arms, all the emotions of the past nine weeks and the past nine hours overflowing, mingling frustration and grief and relief and love.

We spent the evening relaxing together, asking questions and sharing stories and laughing. 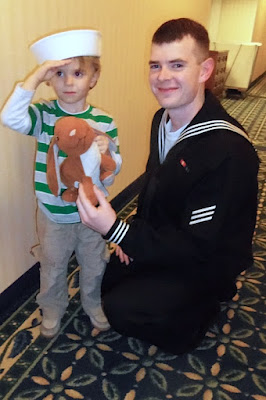 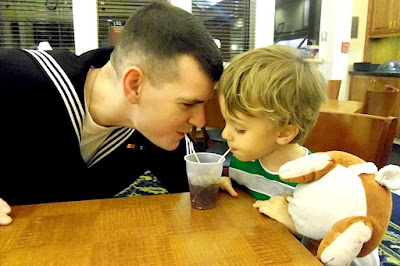 My favorite story of the day: Before we were escorted to the post-graduation reception, Noah and the aforementioned Rear Admiral together, hand over hand, cut the celebratory cake with a ceremonial sword. Let me put it another way: Noah and a high-ranking Navy official used a cutlass to slice a party cake, wedding-style.

I don't know what to do with that information, other than to let it stand alone.

By the end of the day we were exhausted, but happy. 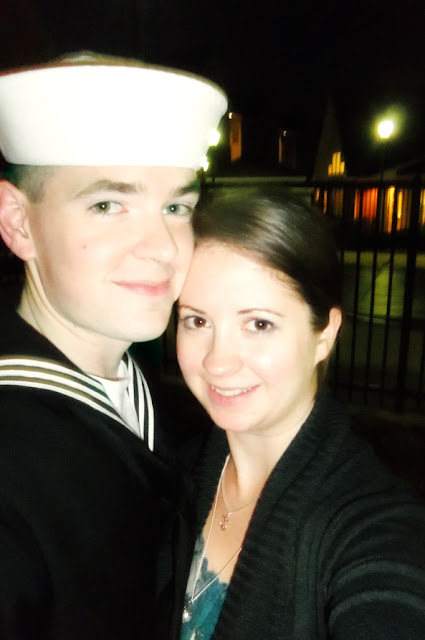 I drove him back to the base around 7, to the drop-off point in the chapel parking lot, where I met two of his shipmates, who were courteous and happy and complimentary. As the three walked away together, Noah paused to come running back and kiss me one last time.

This was so heartwarming to read. Congratulations to Noah. An amazing accomplishment and I am sure the word "proud" doesn't even come close! Happy Thanksgiving!

Thanks Erin for making me cry again. Yesterday was such a great day and as thrilled as I was to be part of such an impressive ceremony and to see how Noah excelled, I was more touched and happy to see the reunion between you, Ethan and Noah. That made my day most special! Dad

This just rocks. Happy Thanksgiving, Erin. And congrats to Noah!

You must be so proud! I teared up a little reading this, I'm so glad you had such a wonderful time.

uh WOW. There is no way to read that and not see it all happening. You two are awesome, and on this Thanksgiving I'm so very proud and thankful to know you both. Military Excellence of Noah, knowing him that is truly predictable. His wonderful Wife handling the home front and being every so supportive of him. Well yeah... predictable and well deserving of House Hold excellence. You guys both ROCK. Looking forward to seeing you at Revo Sunday and even more so to see Noah when he returns.

We are so proud of Noah..thanks for sharing your special day with us. It felt like we were there.
Dianne "the 911 operator" :)

I'm so glad! Congratulations to Noah, and let me just tell you that to read how happy you are has left me laughing out loud and with a serious case of the warm fuzzies. Geez, now I've got to go hug my sister and spread the joy :)

many congratulations to your sailor, and that does sound like the most amazing day ever.

as always, thinking of y'all.

I found your blog a few months back and have been following along ever since. I'm so glad to know that your husband has graduated as an award winner.

Congrats to both of you. What a cool day!

I can't believe I missed this post! It brought tears to my eyes. Congrats to Noah and congrats to you for getting through it all. Welcome to the military, Erin!

Congratulations. I noticed your linkedin comment that you'd "never say Goodbye again" and thought... um, military, that doesn't sound right. I hadn't seen this post so wanted to say Semper Fi to your hubby who will quite possibly get to carry Marines around. ;) And good job for you doing the single wife thing.

Wishing you peace and a Merry Christmas.
meadow