I have permanent dark circles under my eyes and Ethan is sleeping in a cardboard box. So, how are we doing? Pretty well, all things considered.

Two days ago, a large box arrived from Pottery Barn. I'd bought a couple of lamps I've been wanting, which were on sale. I was excited to receive them. I was disappointed there was still no letter from Noah. Ethan's been playing with the box in his room and has tried to convince me to let him sleep in it since it arrived. 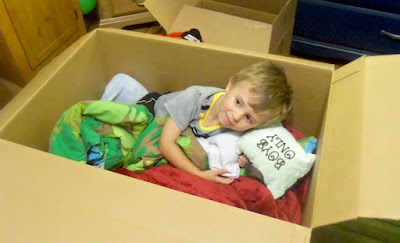 Ethan's clinginess hasn't abated at all. If anything, it's gotten worse. I don't mind all the cuddles and hugs and carrying him (obviously), but these past couple of days his clinginess seems to stem from desperation. He doesn't have the vocabulary to talk about what he's thinking and feeling.

Last night when my mom said, "Guess who's coming to our house for dinner?" referring to my friend Heather and her daughter Ava, Ethan added, "and Daddy." Mom just looked at me, and I had to remind him that Daddy wasn't going to be back for awhile. He commented on the empty space at the table and said it was for Daddy (even though that's not where Noah would normally sit).

Today Ethan had a huge meltdown. He didn't want me to leave the room, and he didn't want to come with me to the kitchen, and right before my eyes he transformed into a banshee. I went to the kitchen and got my snack then returned to him, scooping him up and letting him sob on my shoulder.

"Do you miss Daddy?" I asked. He nodded. "Do you want to talk about him?" He shook his head. 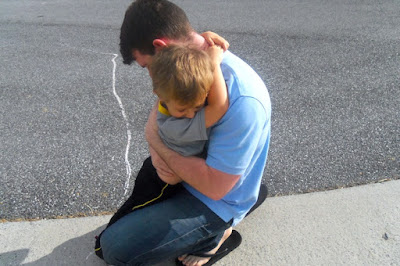 Tonight, after the tantrum and the hours of being clung to, I didn't have the heart or the energy to persist in saying no. I'll move him later, but for now he's curled up on a couple of blankets inside that box, cuddled with Big Bunny, Baby Bunny, Sammy, and the enormous serves-as-a-pillow Big Froggie, sleeping as soundly as either of us can anymore.

Yesterday I arrived home and found a small cardboard box on the front porch.

I knew immediately what it was. Noah had written my name and our address on the side, and had printed his name in permanent marker across the seal on the top of the box. 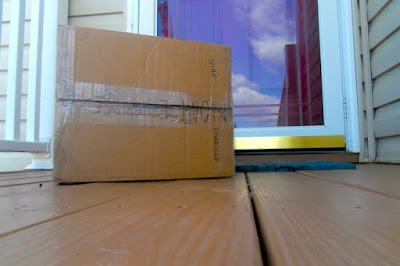 Inside was his backpack, his shoes, jeans, a t-shirt, and two of the three small notepads he had taken with him. I pulled out each item, inspected it. First the shoes, then the clothes, finally the backpack. Inside the bag was only the Navy materials he'd taken to read over on the flight and a car key, as well as his phone with the battery removed. None of the clothes smelled of him. I suppose they smelled of the journey, the fresh cardboard and O'Hare airport and the hotel in Raleigh. 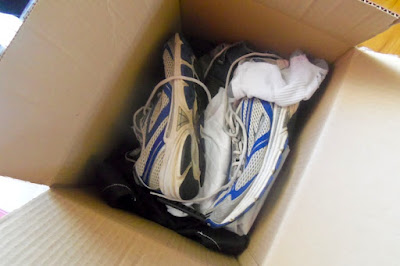 There was no note. The return address on the box is the address of the main base in Great Lakes. No division number, no ship number. On the mantel my stack of letters is getting bigger, still waiting for a destination.

The mail truck was pulling onto our street as I left to go grocery shopping today. I probably would have waited in the driveway for it, but Dad had picked us up and we were dropping Nanny off at a friend's house, so checking the mail would have to wait.

As soon as I returned home, before even opening the front door, I walked down the driveway and opened the mailbox. It was empty.
at 5.10.11

I wish I had something really encouraging to say, but it would be cliche and not really express what I feel. I know I'm just some stranger on the internet but let me know if you need anything.

Please come letter, please! In the meantime, I would totally let Ethan have the box.

Hi Erin,
I discovered your blog a couple of weeks ago via Already Pretty, and have been enjoying your writing and lovely family immensely. I really hope that my one-day son will be as awesome as Ethan (Coolest. Kid. Ever.) I'm so sorry there has been no letter -- its cruel to keep you in the dark but my friend made it back home from Marine training without any greater damage than a terrible haircut so I'm sure your Noah is doing fine, if missing you. Please know that though I am (as Danielle said above) a stranger on the internet, I'll be adding all three of you to my prayers today. And tomorrow. And as long as you need 'em. I send you an encouraging cyber-hug, and all my best wishes.

sigh. just... sigh. my heart hurts for all of y'all. sending thoughts, just like always.

Danielle—A sympathetic stranger, to me, is a friend. So thank you.

Kate—You're the one with experience, so if you say the box stays, then it stays.

Nellie—Cheers for your kind words and piping up so early in your Fierce Beagle readership :) I told another friend, if you need a *specific* prayer request, pray that I stay in high spirits, for I don't want to fall into a funk.

magnolia—Thank you, dear. Empathy/sympathy are just about the best salve for achy hearts.

Hugging you! You're a great parent, and coping doesn't have to look the same as normal in the beginning. You are doing this. You are awesome. You are making it day by day. The first letter might be really short when it does come, but you'll know Noah wrote it, and that will be so good. Then, the better ones will arrive. Soon, but until then, lots of prayers are going up for you!

Having not followed your postings with any kind of regularity, I'm not entirely certain of what the situation is. But from what I gather, Noah is away on military duty, yes?

My father was a career military man (Air Force Senior NCO)and would often leave for extended periods of time. It was always hard to see him go (especially when he couldn't even tell us where he was going) but it was always great to have him come back. My parents always favored a tough-love-walk-it-off-you're-not-really-hurt-that-bad approach to things so there wasn't room for a lot of crying for me or any of my sisters (well, maybe the youngest, but they'd softened up a bit by the time she came around). We're an odd bunch, my family, but we found ways to rely on each other through multiple TDYs, deployments, and frequent moves across the globe.

I guess I'm saying the military lifestyle (at least for a dependent)is something you get used to and even come to appreciate.

(...and by the way, since you and Noah own a piece of my work from WAAAY back when, I thought I'd let you know that creekification.com now features a blog page that I'll update from week to week with sketches and projects and whatnot. Stop in if you get a chance...)

Julia—You've no idea how much your words have comforted me lately. Wise!!

Nate—NATE! Yes, Noah is at Navy boot camp. He's joined the reserves, but he'll be going through the training as usual (followed by 6 months in Pensacola for A-school, but luckily Ethan and I can go with him there). Thanks for your insights. I can already see how Ethan and I are settling in to a new routine, and we're definitely trying to look at this as an adventure.

And speaking of your art...it hangs proudly in our office/music room to this day. I'll def. subscribe to the Creekification blog!