Life Without You: The first three days

A little over a month ago, in fact the very day after I returned from Seattle, Ethan and I accompanied my mother-in-law on a weeklong trip to DisneyWorld. Noah and I have never been apart for as many nights, nor has Ethan been away from either one of us for so long.

The trip was somewhat last minute, so I didn't have much of a chance to write about it before we left. What I did do, though, was write Noah a letter every night. One thing I realized on this trip: I was getting a taste of what life will be like for me and Ethan when Noah goes to basic training and then on to Pensacola for advanced training. He encouraged me to share some of what I wrote with you guys (I've edited out all the parts describing our meals and also the sexy bits). Anyway, here are some of the excerpts.

As I sit here typing, Ethan is sleeping like the exhausted baby he is on the bed next to me, while the only slightly muffled sounds of Bambi being shown on the pool deck just outside our room reverberate through the walls. 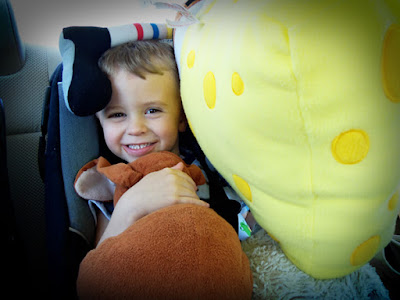 Our first stop after arriving was the World Showcase and The Rose and Crown Pub. We were seated almost exactly where you and I sat for my birthday on our honeymoon. The fact that the place had such significance to me made your absence felt even more. When on our way back out of Epcot your mom noticed a duck with a broken bill (you could see the tip of his tongue even when his mouth was closed because of where his bill had been damaged), I nearly cried.

I also really felt your absence when Ethan and I went swimming in the pool walla [ed. note: that's what Ethan calls the pool] after dinner. Seeing other kids (especially boys) in the water with their dads, and feeling very much like a mom (who knew that one day I’d prefer to breaststroke above water to avoid wetting my hair and face?), made me sad. I wanted you to be part of it, and I wanted him to have you be part of it. Geez, I’m depressing myself all over again.

When we came back to our room, and just  before reading books and eating Doritos and whining for another 10 minutes before dropping suddenly off to sleep, Ethan took a bath with his new bucket o’aliens from Toy Story, our first purchase of the trip. Out of the blue he said to me, “Today was really fun.” Can you believe the kid said that? Of course it sounded like “tidaye wass reey fun.” Still. Dagger through the heart.
Love to thee,
Erin


*
Tuesday, April 5, 2011
Dear Noah,
After sleeping for 12 full hours, Ethan woke up by falling out of bed. This was no fluke, either. Several times throughout the night my MommySense alerted me to danger, and I’d wake up to find him teetering on the edge. Literally. Arms and legs dangling off, and a couple times even his head. You know how top heavy that kid is. It’s a miracle he didn’t fall off the bed sooner. 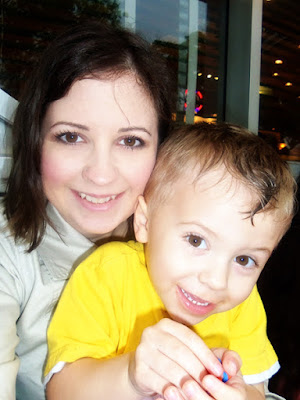 We went to Hollywood Studios today. Although it’s still not my favorite park, it’s grown on me. We did the Honey, I Shrunk the Kids playground, for one thing. I had to Go In after Ethan a couple of times when he hadn’t emerged from the giant ant-hill caves for awhile. Eventually he had to be dragged out literally screaming.
He’s gotten quite adventurous on the slides, by the way. He went down the giant Kodak film slide approximately 400 times. I had to repeatedly remind him to wait his turn (he discovered a shortcut along the inside wall that put him ahead of all the other kids in line—rather clever, really, but I didn‘t want to look bad in front of the other parents). Don’t worry, I got video. 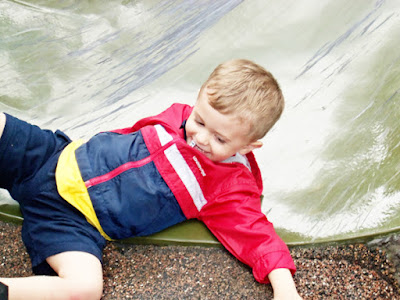 Playgrounds are becoming a big thing for him. We stopped at one each day on the road as well, at his request. The kid is social, which is more than I can say for his mother.
This morning at the hotel shop I talked Ethan down from an un-marked-price Cinderella’s castle replica to an elaborate, $60 Cars play set to an acceptable $12 Cars play set, which he eventually traded of his own accord for two $4 sets of Cars and Toy Story silly bandz. I felt a little guilty since he really seemed to think he was coming out on top, but we have no money. So. 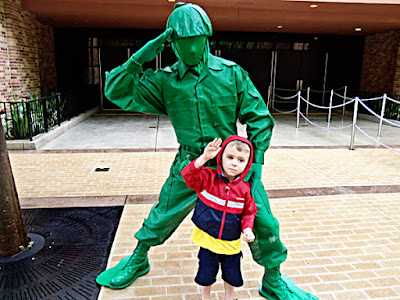 At the moment I’m looking at Ethan’s turtle nightlight and thinking about you packing all his stuff, and missing you like crazy. I really prefer life with you in it. I’d rather it be you getting on my nerves than anyone else is the long and short of it.
Love to thee,
Erin
*
Wednesday, April 6, 2011
Darling Noah,
Let’s start with the afternoon and work backward. After we returned from Animal Kingdom, Ethan and I went to the pool. We swirled and twirled for a few laps, then he wanted to get out. At that point I decided it was high time to go looking for the rumored kiddie pool.
We found it quickly, and Ethan’s eyes lit up. He was hesitant at first, what with the two sprinklers on the one side, but he soon found his sea legs and was in and out of the wading pool and the spray like a pro. 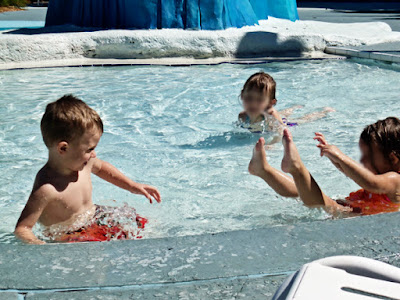 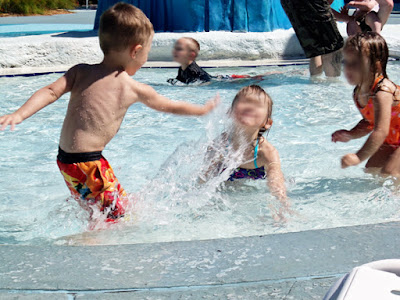 Woops
What really gets me is seeing how quickly he makes friends. He sees a kid who looks interesting, tails him or her for a moment, and once eye contact is made, he’s got a new buddy. Today I saw him befriend two three-year-olds (a girl named Angelina and a boy named Austin), a couple of toddlers, and a couple elementary schoolers. Angelina’s nana even offered him grapes as they were leaving, and Angelina was still shouting goodbye after Ethan was no longer in sight.
It’s now nearly 8:20 and phase 14 of my Tire Ethan Out for the Love of God In Jesus’s Name Amen Program (TEOLGJNAP, for short) has been rendered unnecessary. If he wasn’t acting sleepy, I was going to take him out to the pool deck to watch tonight’s feature, Bolt. Now I don’t have to—but I would have, and gladly.
I realized today while at the kiddie pool and the playground(s) that these things were made for parents. When I was younger and not a parent, hanging out with a kid and basically acting as the catcher in the rye all day sounded dull. As a parent, I will sit and watch him blow off as much steam as possible with joy in my heart. Plus it really is fun to see him “interacting with other kids.” Ugh I hate sounding like a parenting magazine.
My heart aches seeing him put his little self out there in the wide world, optimistically assuming he’ll find some kindred spirits along the way. I’ve seen him fearlessly (but politely) speaking to adults when the occasion calls for it. He isn’t easily intimidated (although he still has a cautious streak when it comes to adventure…another trait from me). 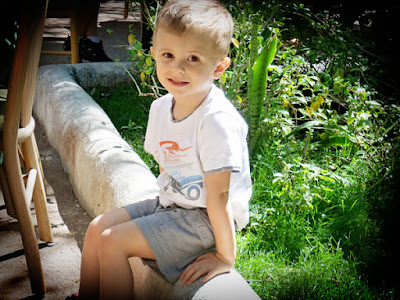 He does the cheesy face when he's tired.
Honestly, he’s always the focus of my attention, so I don’t have time to be apprehensive about Talking to Strangers. Especially people with kids. Automatic common ground, you know? Plus having a kid always provides an instant exit strategy. You can just leave without warning and not be perceived as rude. "The wheels are coming off the wagon," you can nonverbally say with a weary shrug, and people just nod their heads or smile ruefully. My kind of goodbye, really: short, abrupt, and with minimal theatrics.
Speaking of theatrics, Mom told me when we pulled away on Sunday afternoon, you said, “There goes my life.” Gosh that makes me love you, babe.
Love to thee,
Your wifey
*
To be continued....
at 19.5.11

Letter writing: the forgotten art. Excellent and I hope Noah cherishes these for many years...

"My heart aches seeing him put his little self out there in the wide world, optimistically assuming he’ll find some kindred spirits along the way."

That so eloquently defines so much of parenting for me that I felt my heart wrench a little when I read it.

This might be one of the best things I've ever read! "There goes my life". Dagger through my heart! ;)

Way to make a pregnant woman cry! (Doesn't take much these days) ;o)

Slamdunk—He'll have a lot more to cherish before too long: at basic training, he's allowed letter writing only. Not even email.

Lish—Everything about being a parent is a double-edged sword, I think.

Costume Diva—Maybe we should communicate only through letters, that way I'd have a lot more good material.

Danielle—I know. When I was pregnant I cried my way through a comedy. In the theater.

after reading this, it made me think about my husband getting deployed in the future. we've been lucky to have so much time together in the past 2.5 years...when we were just friends at the time, him leaving sucked. it'll be exponentially harder now that we are married.

this is so sweet. i did the same thing when the man was in africa in february, though i wrote him things i'll never show him. the act of writing them, though, made his being so far away easier. i felt like i was talking to him.

maybe it's silly, but i love it.

stephanie—How long are his deployments?

And there are great things about deployments - mostly the honeymoons when they return. :)

Although I've been absent for so long so I have no idea which branch. My beloved Corps, perhaps? :)