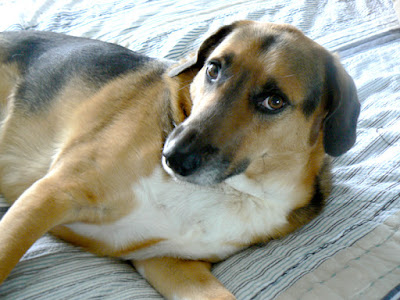 Whenever Cody lives through a trauma, he comes down with a case of Crippled: Mentally, Physically. Unfortunately, last night was one of those nights. And the trauma he bravely survived? Earlier that evening Noah made a Mii for him, which required Noah picking him up and standing with him on the Wii Fit balance board to take his weight. (77 pounds, in case you're interested. Also, take a mental picture of that: Noah holding a 77-pound furry bundle of nerves while teetering on the balance board.) Discussion Question: What would possess Noah to make Miis for our pets? Further, just because you can do something, does that mean you should?

In Cody's case, I would argue against doing anything to startle, confuse or otherwise unsettle him. The list of prohibited behaviors includes vacuuming, telling him to go outside when he doesn't feel like it, expecting him to eat his dinner instead of sitting nearby guarding it for three hours, using the blender, and picking him up to weigh him for his new Mii.

Last night was the worst possible night for Cody to transmogrify into Cripple Cody: Mentally, Physically, because not only was it Ethan's first night in his Big Boy Bed, it stormed hardcore sometime in the wee hours. Which, incidentally, is on the prohibited list.

The night started off normal. But then sometime shortly after I'd started REMing in earnest, I heard him tap dancing on the floor next to me. "Hop up!" I whispered genially. Unfortunately I didn't yet realize that I was dealing with Crippled Cody: Mentally, Physically. His "hop up" played out in a stilted, unskilled gymnastic routine in which he sort of threw his body at the bed while planting his front paws on the mattress. Lather, rinse, repeat. "HOP UP YOU IDIOT!" I might have hissed. At this point Noah was awake, too, and he stomped out of bed, grabbed Cody's incapacitated back end, and hoisted him up.

Two hours later, he was on the floor next to me pacing again, which raises the question, Why did he keep jumping down? After being hoisted yet again, I thought we were in the clear. Silly, naive little Erin. A little before six this morning, the thunder and lightning and torrential rains rolled in. Cody would continue to sleep on the bed with us, cozy and safe. But Crippled Cody: Mentally, Physically decided that the safest place to be was on the floor, squeezed between two guitars Noah leaned in the 2-foot-square space between his end table and the dresser. Observe: 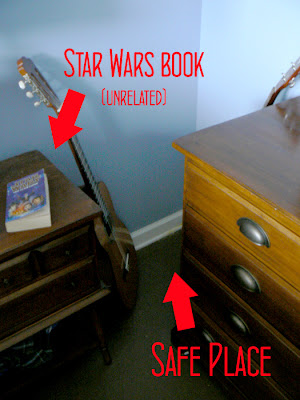 Although in this lighting the floor looks the color of diarrhea, it's actually painted
Mudslide by Valspar (with an acrylic floor and deck paint)
While Cody tried to wedge himself in, we were serenaded by the sound of a large dog butt dragging across the nylon strings of a moderately expensive, handmade classical guitar. Meanwhile, Ethan slept soundly in his Big Boy Bed, thunder and all. (Update on THAT situation forthcoming.)

You'll be glad to know that as of 9 this morning. Cody has made a miraculous recovery. 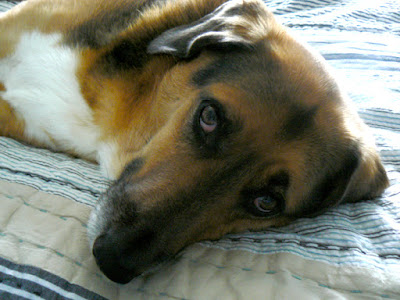 The flare-up of Crippled: Mentally, Physically is once again under control. Unfortunately, it's contagious and those with sleep deprivation are most susceptible. If you see what I'm saying.
at 14.10.10

Ahh. I know you're exhausted, but look what a handsome dear he is! Those eyes remind me a lot of Amos, they would understand each other. Sensitive, that's all.

Amos, too, all 58 pounds of him, climbed up on our bed this morning at 4 am because of that scary thunderstorm.

Oh nobody's arguing that he isn't handsome. Tom Cruise is handsome, but he's still a few crayons short of a full box.

And sensitive is le mot juste.

that is hilarious (after the fact). i think our dogs are related somehow..because they have very similar fears. they must be related.

oh, and i woke up to a nice big pee spot on the bed this morning.

This post made me laugh out loud. Reading your gripe about your dog actually improved my mood. Hope a total stranger reading your blog does weird you out too much...

adventuremeg—i'm not weirded out. laughter is my business.

adorable dog :-) and you have a fun blog Rebecca

Obviously your pets need Miis! How else can they play Nintendo while you aren't home?