For 24 hours, Bunny was missing.

We scoured the house from top to bottom, from the far corner of the Poo Woods to the dry lowlands in the yard. We opened drawers, looked behind bushes, inside appliances, under every blanket. And then we did it all again. Nada.

I tried this morning to get Ethan to remember where he last had Bunny. Between naptime and bedtime were the foggy areas, which was unfortunate. Things got worse when he told me, "Bunny my beth fliend." At that point I called Mom, who proceeded to ask the Lord to lead one of us to Bunny.

Two minutes later, I felt a jolt of inspiration. I realized that my first mistake was not thinking like a toddler. What would make sense to a toddler? I went immediately into the kitchen, walked over to the old, empty Diaper Genie waiting to go under the house for storage, opened the thing at the hinge, and Lo! Bunny was found.


*     *     *
An hour later, while Noah and I were cleaning up the messes we made while searching for Bunny, I realized Ethan was awfully quiet. Which means one of two things: He's pooping and doesn't want us to know, because we'll suggest doing it on the potty; or he's doing some other un-kosher thing, like shoving a taper candle into the kettle spout (true story).

We walked around the house, from room to room, asking "Ethan?" behind each freshly opened door. It didn't take long; our house is 1,100 square feet. He wasn't in our bedroom, or our closet, or our bathroom. He wasn't in the main bathroom, or his bedroom, or the office. The television, playing Muppet Treasure Island (his choice), broadcast its noise to nobody.

My second thought: He's wandered out, and somebody has taken him.

"Ethan!" I was nearly screaming as I ran through my neighbor's backyard toward the road behind our house that led out of the neighborhood. Since I last saw him, it had been three minutes, maybe four. Less than 300 seconds, but I could feel life turning a direction I wasn't willing to go.

Then I heard Noah shout, "I found him!" I stopped and began walking the steep slope back down to our house. I lifted my hand to my forehead. I didn't want the neighbors to see me crying, to know I had lost my son, even for a few minutes. Noah led me into the house, down the hall and into Ethan's room, where he was lying on the floor in a pile of stuffed animals. He was hiding. He had covered himself up and hadn't made a peep.

When I saw him there on the floor, reclining in a plush bed of bears and frogs and rabbits as though the world was perfect, I sobbed. For what might have been. 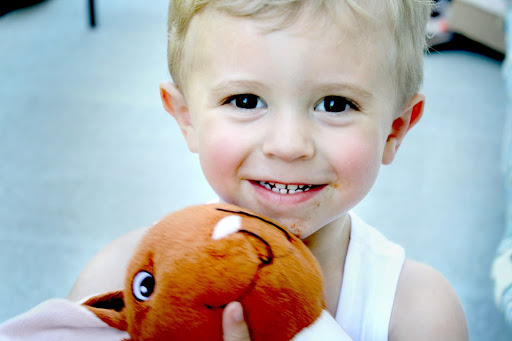 Glad you found Bunny and your little man! You're a great Mommy!

Our daughter did something similar last summer. We were at a friend's house. she lives right on a busy street with a bus stop in front of her house. The kids were playing hide and seek and Daisy, 5 at the time, hid in the back of our van totally concealed. She stayed quiet while a dozen of us frantically searched high and low. I was yelling like a mad woman her name, and sobbing. I was certain someone had carried her off. Finally after a 1/2 hour she resurfaced. So embarrassing because I didn't want my friends thinking I was totally irresponsible, but it was so real that I had lost her, or like you said, for what could have been. It was very upsetting. Anyway, So glad he was just being clever in his room!

"Less than 300 seconds, but I could feel life turning a direction I wasn't willing to go."

I've had this happen twice in my twenty three years of parenthood. The worst minutes of my life by far.

So glad there was a happy ending. :o)

Tie him to you with a bungee cord, it's the only way.

I got a phone call last year from my ex husband that his mom went to pick our son up from school and "he wasn't there." I felt my world crashing down all around me. Fortunately, they both went to the school office and reunited there. It was torturous.

On a lighter note, did you have to febreeze bunny after his imprisonment in the Diaper Genie? The smell inside that thing used to make me gag!

That is the worst feeling. The rising panic. Horrible! Glad your agony was not prolonged. Sounds like he was copying the scene from the movie ET.:)

i'm glad everything turned out good! how awful.

Bunny looks happy, too. Reunited, they must have needed some bonding with the other animals?

My daughter disappeared inside a department store when she was about 2.
She'd figured out how to escape the bonds of her stroller and as I turned to check out a whatever on the rack behind us, POOF! She was gone.

She hid in the middle of the racks of clothes - the old circular racks that used to be in all of the stores. Finally the giggles got her and she couldn't be quiet any longer.

I handed her off to my mom, so sure that I was either going to hang her by her toes or sob for hours. Neither are all that great to give in to around an impressionable 2 year old.

I never will forget that feeling though.