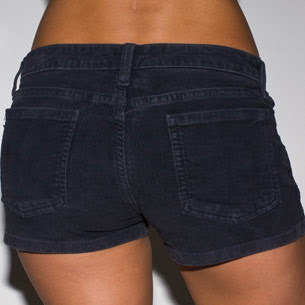 American Aparrel, exposing us all to...fashion
Confession #1: For this reason, I haven't bought shorts in years. Until this year! Praise JC Penney's a.n.a. brand. I've found that a.n.a. clothes are on trend but are based more on human anatomy, and also those who don't want to share certain parts of that anatomy with everyone else. Surprisingly, the St. John's Bay brand (which I've considered the gateway from trendy to elastic-waisted jeans, no offense to the grandmothers out there) actually have upped the ante with some well-made, classic pieces.

Confession #2: I recently bought three garments from St. John's Bay. A sleeveless, ruffle-front white blouse; and two...skorts. There, I said it! SKORTS! I WEAR SKORTS, OKAY?

Just hear me out. These aren't your early-90s middle school faux-wrap-front skorts. You know, the ones that were only good on the approach, because the back featured an elastic waistband and exposed short legs? 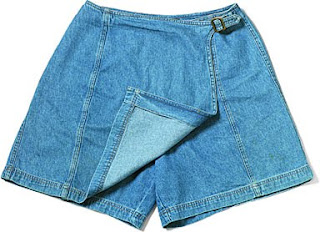 My new skorts are essentially skirts that reach mid-thigh and have unobtrusive sheaths for your nethers underneath. So that when you bend over (or, in reality, fall down and do a somersault, because these are made with more fabric than that of a handkerchief) you don't have to worry about what the paparazzi captured on camera.

Confession #3: I love Chick-fil-A. Is it technically fast food? Yes. But it's delicious, and they do offer several much more healthful options (like the chargrilled chicken sandwich). Also, the service is exceptional. It's like walking into a 50s diner, only with a hookd-on-fonix cow mascot and balloons. Plus, they're always closed on Sundays to allow their employees rest, a chance to be with family and friends, and the opportunity to worship if they so choose.

I realize this third one has nothing to do with the first two, but nobody ever said there was a theme.
at 2.7.10

Email ThisBlogThis!Share to TwitterShare to FacebookShare to Pinterest
Labels: telling tales, the Southern experience, Whose Body Is This? Disease

As I was reading, my eyes were skipping ahead and I saw the old school skort and thought "Oh dear." YES, I remember those! I had SEVERAL! Bought for me by my GRANDMOTHER! There were COORDINATING TOPS!

YOURS is awesome, and it's how ALL skirts should be. I tried on something similar at Target, and not only was it VERY SENSIBLE, the shorts part was a SHAPING GARMENT, so it also made me all SMOOTH, which was a nice bonus to looking COVERED.

Hey way to go on the shorts and uh skorts buying! And to Chick-fil-a, I was home for one week and had it 3 times, so yesh.