Adventures in Our Nation's Capital, Part the Second

The train to the Nationals game was packed with bureaucrats clad in silk suits headed home for the day. We were crammed in as tight as we could get, which made the saunalike conditions even more oppressive. Let me tell you, that is not the place for a toddler with a summer cold who really needs JUICE JUUUUIIIICE JUUUUUUUUUUUUUUIIIIIIIICE only to discover that his sippy cups must have fallen out of his Lightning McQueen backpack on the charming effing trolley. 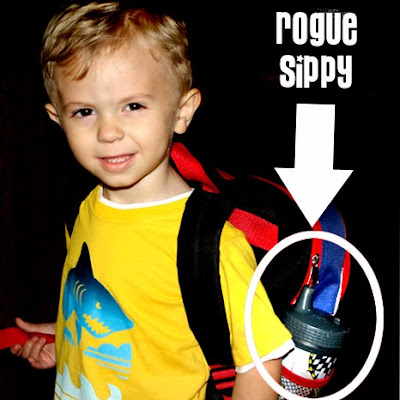 While I tried to comfort a despondent Ethan, and a couple of nice ladies sitting nearby handed me a tissue and tried to make him laugh, my mom was gearing up for a prizefight on the other side of the train car.
"Will somebody shut that *#^@($ kid up?" a young woman said to her friend.
"Give it a pacifier or something," the friend replied.
It's impossible to describe what goes through a Nana's mind when somebody disses her grandbaby. So instead, I've made a quick video to convey what my mom was experiencing when the woman on the Metro cursed her grandson. Ladies and germs, I now present "Hell Hath No Fury Like A Nana Scorned," An Erin Etheridge Joint:
The women's conversation about That Kid continued with increasing levels of profanity, while visions of comeuppance danced in Mom's head. If there's one thing that really sticks in Mom's craw, it's bad language in public—especially in front of children. In Los Angeles she once followed the car of a man who dropped an f-bomb on her, walked up to and knocked on his window, then told him to go wash his mouth out with soap.
"Do you really think that child's parents are enjoying this?" she turned and asked the two women. Mom, unversed in D.C. lingo, didn't realize she had just demanded Pistols at Dawn.
"What the *(#@@& you *@&^* don't you ^#!*!*# and !^@&^((@#*," the first woman said.
"THAT'S MY GRANDSON YOU'RE TALKING ABOUT," Mom informed her.
"I DON'T CARE WHO @$(((!))%$% YOU @(&(*$*( WHY DON'T YOU *&(@!^^$* AND **(&#," the women replied in concert. I would tell you what they actually said, but this is a family blog. Also, Mom didn't recognize some of the words they used.
Mom decided to be the bigger woman and conclude the discussion.
"God help any child you ever have," she pronounced with Christian conviction.
Unfortunately, one of the young women happened to be pregnant. And wasn't, apparently, a Christian.
After a few more exchanges, including some helpful behavioral instruction from Mom and a lot of Bad Words Mom Had Never Heard Before from her rivals, Mom decided she'd better stop before the encounter got physical. And believe me, it could have. (I once witnessed Mom go stomping toward our parked car containing Clyde the Beagle when a crowd of teenagers standing in the vicinity of the car started laughing. "Are they messing with our dog?!" was her battle cry. It turns out they weren't, but Mom was prepared to go the distance. I also once witnessed her nearly pull a bank teller over the counter, but that's another story.)
Now, it might have been fun to cap off the day with a free tour of D.C. Metro Prison, but we'd already purchased our Nationals tickets, so Mom closed the book with a scoff, which the first woman mockingly mimicked.
Shortly thereafter the two women stood to exit at the stop before ours, and had to squeeze past Mom to get out.
"Excuse me," the instigator said to Mom sarcastically.
"Oh, you're excused," Mom replied with a smirk.
When we arrived at our stop, we headed directly for the Nationals gift shop just inside the gate. Blessedly, they had a set of two miniature sippy cups for the bargain price of $19.99. Nana immediately bought them for her grandson, and that's all I have to say about that.
*     *     * 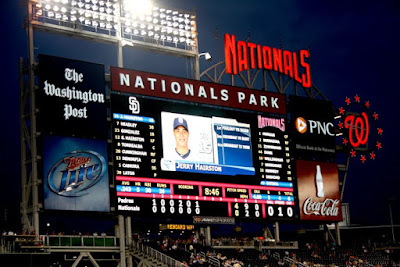 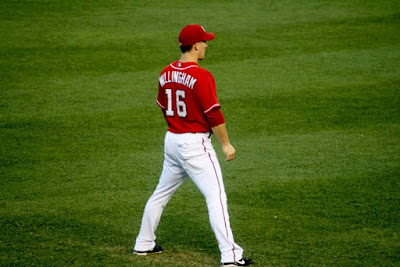 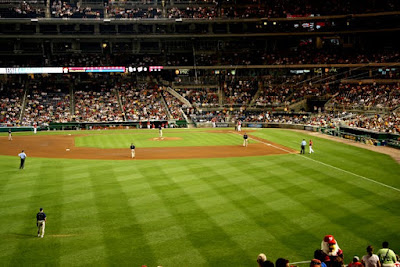 By the end of our first day in Our Nation's Capital, I'd drafted a list of grievances to take to President Obama, at the top of which was the price of a soft pretzel and a beer at the Nationals game ($13.50).
So. I didn't have a soft pretzel and a beer at the Nationals game.
Another grievance: Stephen Strasburg did not pitch although he was scheduled to, and Kyle specifically chose the Thursday night game just to see Strasburg. His start had been pushed to Friday night's game. After the Subway Incident and the Capitol Hill Assault, this was a crushing blow. So we threw in the towel and bought five bowls of Edy's ice cream.
We headed back to the hotel during the 7th, shortly after the San Diego Padres' pitcher hit a home run off the Nationals' Strasburg-replacement hurler. In case you don't know anything about baseball, a pitcher getting a home run is like Pamela Anderson getting a book deal—offensive to opponents, yet strangely commendable.
On our way out we stopped to take pictures on a little outfield overlook. Ethan, taken by the rhythm of between-innings music, started to dance in my arms, so I followed suit. And then a park worker told us there was no dancing on the platform. 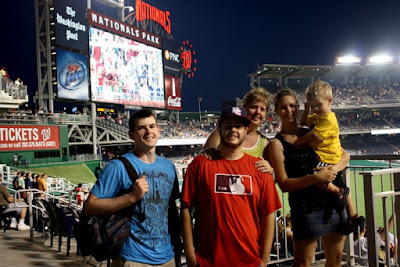 Off screen, stage right: Disgruntled Nationals Park worker whose job is
to defend national security by not allowing fans to dance on the photo platform.
On the train back to the hotel, we vowed that our second day in Our Nation's Capitol would go better than the first. At the very least, we implored Mom to refrain from any more fights.
at 15.7.10

Way to go Nana! My mom is a Nana also and would have done the exact same thing, although she would have used some foul language (strictly for emphasis, of course).

Oh, and let me commend you for traveling with a toddler. We're planning a summer vacation for next year (yes, I need an entire year to prep myself...and locate some Valium).

I'm looking forward to reading the next installment of your DC vacation.

Yeah, Nana! Erin, I'm pretty sure any of us would have TAKEN THOSE B#&@^%S OUT on Ethan's behalf (or at least used some fightin' words) :)

so what you're trying to say is that you're 5 seconds away from moving to dc because the people are so friendly! don't worry about that pregnant woman. she'll get hers in a few months. way to tell 'em, nana!

Don't forget when mom and my friends mom almost started fighting the other mom's at my baseball game when they were talking trash to us while we were playing. - Kyle/Brother/Son/Uncle/Funny guy

Nana and I are cut from the same cloth.

Once when I was living in NYC and my parents visited me, a man began to LOUDLY COMPLAIN about how my dad was taking up the whole pole on the train. (You're supposed to share them.)

Then I turned to man and said, "And you? WATCH IT."

He began to profusely apologize. I felt like a real New Yorker in that moment.

I really hope Day #2 is better!

Oh, those &%%!*& needed to be taken DOWN. You should have sent the NoDancingAllowedParkWorker after them.

I hope Nana used her best Belfast accent - I also find that just laughing at people and making sure they notice you doing it really winds them up. I remember a guy gave the birdie to me & my nanny one day when i was driving and she just laughed and waved at him- genius!! Sue x

And this is why I love your mom!! This story is hilarious and I'm glad she went after those 2 women----out of control!!

Ethan is lucky that he has such a fierce grandma. I understand that it is difficult to be in an enclosed space with a crying child, but it's not like you weren't trying to calm him down!

That pregnant woman is in for a world of surprise in a few months!

Are you wearing your new skort there?!!? You guys all look really cute in this pic.

Ha! I'm loving your mom! Although not sure she'd love me so much considering her dislike of public profanity. Although I swear I'm getting better...at not swearing.

that video was hilarious...and also was the same song my husband and i used for our entrance into our wedding reception (after the wedding party had the top gun theme song).