Adventures in Our Nation's Capital, Part the First

Our six-plus-hour drive to D.C. (actually, to Laurel, Maryland, the only town within 50 miles of Our Nation's Capital with a decent hotel that didn't charge our monthly grocery bill per night) went remarkably smoothly, aside from my parents' annoying and unaccountable obsession with the data display on the dash of their new Sentra. After I nearly missed an important merge and pulled up alongside their car to await further instruction, Mom rolled down her window and solemnly informed me that it was 102 degrees outside.

Ethan hadn't been on a car trip of more than two hours in his entire 30 months on the Earth, but he did wonderfully—especially considering the day before he had contracted a summer cold. Upon arrival at the hotel, I built an altar and thanked God for inventing portable DVD players. We were all hungry, so for a taste of local flavor we headed to a great little Italian place, Olive Garden. We needed to carb-load for the next day, the First Day in Our Nation's Capital.

Since my mom and Kyle had never been to D.C., and my dad hadn't been since the Carter administration, informally known as the Years in Which He Had Hair, we opted to get a two-day trolley pass that would take us around the major attractions. Our hotel was only a couple blocks from a MARC-Metro stop, so we took the train into D.C.

My goal on any trip is to not act too much like a tourist. I should have gone over this rule of thumb with Mom beforehand, because she stepped on the train and promptly sat in the conductor's seat behind a little Plexiglas divider. Quite unfortunately, Mom's trouble on the subway had just begun. (<--foreshadowing)

Upon arrival at Union Station... 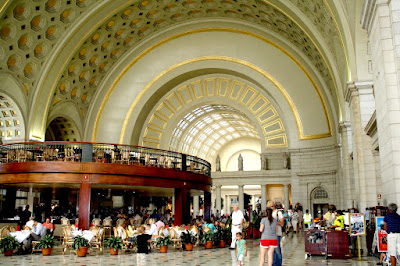 ...we hopped on the charming open-air trolley only to discover that it was approximately 123 degrees Fahrenheit in Our Nation's Capital. No matter! The first stop was Capitol Hill, just a few minutes away. 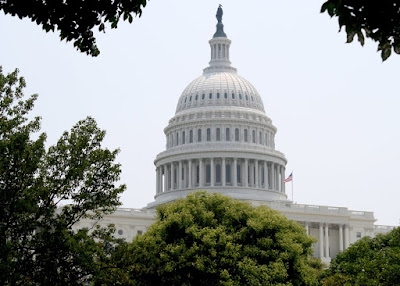 Someone told us there was a cafeteria inside the Capitol Building, so we hopped off at the West Entrance, where all inaugurations have been held since Reagan, and hiked the roughly four miles to the East Entrance, where visitors are permitted.

Let me rephrase that. We hopped off at the West Entrance and hiked the roughly four miles to the East Entrance, where visitors are diddled.

Noah had cleverly brought along a bag of beef jerky for snacking, which the guards made him throw away.

"Or you can eat it now," they generously allowed.

Seeing as he couldn't quickly eat a pound of salted beef without water in desert conditions, he begrudingly took the bag of jerky to the conveniently located trashcan.

"That stuff is expensive," one of the guards added helpfully.

In addition, Dad had to throw away the bag of M&Ms he had packed in Ethan's Emergency Kit. And their brand-new spray bottle of suntan lotion. Around this time is when I began taking notes in my Moleskine, which I'd brought along for keeping track of new insights. Also, blog material.

The building was certainly spectacular, but the free guided tour only took us to two rooms, where it became evident that the long-haired tour guide (who talked in a deadpan that I couldn't decide betrayed boredom or prolific past drug use) was spit-balling when he debunked the myth about the rotunda's parabolic ceiling four different ways (spoiler alert!). 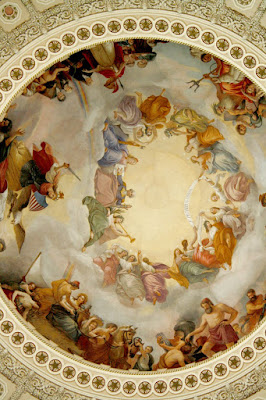 Lunch at the Capitol cafeteria was worth its weight in gold—and I don't mean that figuratively. A salad, a sandwich and two sodas cost us upwards of 20 bucks. Even though I wasn't hungry anymore, I forced down a slice of boiled egg and a broccoli floret because, being among the heavier items in the pay-by-weight salad, I knew they had cost me big.

We slogged back to the West Entrance (during which I sweated off my entire lunchtime caloric intake) and hopped on the trolley. Still sore from being told to bend over at Capitol Hill, our next stop—the National Air and Space Museum—was a welcome diversion.

I was truly delighted by Ethan's reaction to the museum. He loves airplanes and frequently points them out in the sky above our house, and seeing some up close was a real treat for him. Even more delightful was his joy at seeing all the "rocket ships" in the museum's space exploration wing. I got to show him the inside of John Glenn's historic Mercury capsule, as well as the command module of the moon-landing Apollo 11. He even got to touch a sliver of moon rock. I know he probably won't remember any of this, but it's something I'll never forget.

The moment was so transcendent for me, it wasn't even tainted when Mom mistook the life-size space station replica for the escalator and announced that the lunar module used in the Apollo missions looked "like a piece of crap." 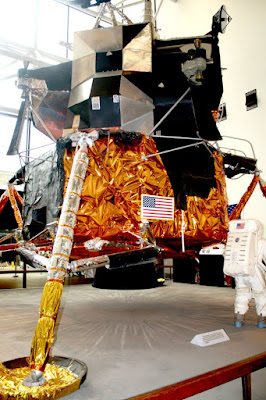 Which, objectively, is sort of true, but it offended my Inner Space Nerd nonetheless. (Check out the "Spider" episode in HBO's From the Earth to the Moon miniseries for an awesome perspective on the development of the LEM.)

I had a Special Moment with Mom, too, though. I got to show her the WWII Royal Air Force uniforms; her father was an air gunner in the RAF and would have worn just such gear. She had her picture taken about 14 different times (to get the best angle) next to the display. 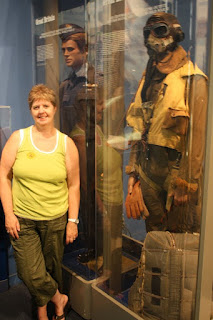 Our last stop of the day was the Jefferson Memorial, which I was unusually pumped about. But what can I say? T.J. is my favorite founding father. 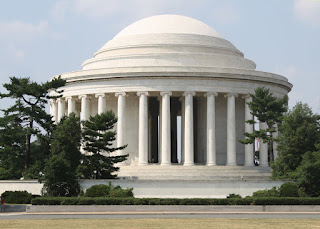 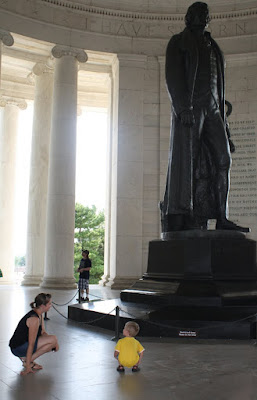 After that it was back to the subway headed to Nationals Park for a ballgame. Kyle had chosen Thursday evening's game because Stephen Strasburg was scheduled to pitch, a sight wondrous to behold.

Wonderful and awesome photos...I wonder who took them?

Dad (not only a commentor, but also family vacation photographer)

P.S. A wonderful time was had by all (and some very memorable moments) even though we all were pools of sweat by the end of each day. I hope the sad face, happy face sequence makes the blog soon!

Oh my heck - you brave souls came to DC in that awful heat? This post really cracked me up - there isn't a lot of SHADE in our nation's capital and I KNOW how miserable it can be. Might I suggest your next visit be in the spring or fall next time? The cherry blossoms are beautiful in the spring :) Looking forward to Part the Second!

I really can't wait to hear about the fight.

If it makes you feel better, my dad was nearly removed against his will from the Metropolitan Museum of Art in NYC for scratching and hitting a metal statue.

His defense? He wanted to see what it was made of.

I loved the photo of Jefferson, Ethan and his mom.

I'm really surprised that your lunch was so expensive! I haven't been in a few years but I specifically remember that the caf was subsidized and pretty cheap!