The difference between then and now

A few weeks ago, Noah and I were driving somewhere and listening to Coldplay's Viva la Vida.

"This CD reminds me of our trip to Baltimore," he said.

"You don't remember?" I didn't. "We listened to it the whole way there and back."

I had no memory of music.

During that trip, I realized with certainty that something was seriously wrong. The foremost hint was at a lunch of fish and chips overlooking the Inner Harbor, when I cried uncontrollably into my plate because Noah had timestamped a photo I intended to use in print for my then-employer's Maryland guide.

"Did you think I was acting crazy?" I asked him a couple nights ago when that trip reappeared in conversation.

"No. Back then I was the kind of person who thought I was doing something wrong."

"But now we know you weren't doing anything wrong," I admitted with uncharacteristic generosity.

"Right. Turns out, you were crazy," he replied triumphantly.

"Do you wish you had married somebody else?"

"Nah. Everybody has their neuroses," he said.

"True." I took a moment to reflect on Noah's uncharacteristic insight.

"I'm glad it's yours I have to live with," he said tenderly.

What could I do but laugh.


*     *     *
Although I was diagnosed with postpartum depression, the "postpartum" describes the onset rather than the extent. Ethan is nearly 2 1/2 now, but I still take medication daily to regulate what had become a daily—sometimes hourly—fluctuation between feeling angry and feeling almost nothing. Those first few months after Ethan was born were happy but not pleasurable, and that fact had nothing to do with the fragrant, tiny angel I nursed every evening after work. One night as I sat rocking Ethan, Noah lying on the floor at my feet, I began to cry because I could think the words, "I am happy," but I couldn't feel them. Luckily my particular mental illness is mild and didn't affect my sense of reality, just my full participation in it.

I still have occasional "bad" times. But I can maintain clarity, which is the difference between then and now, and I'm usually back on track within just a day or two.

Dealing with mental illness (and don't think I'm not aware of the stigma associated with that term, but I'm determined to use it in hopes of abating the stigma) has had its positives, I guess. Mainly I'm much more in tune with my emotional fluctuations, so I can be proactive about living life to enjoy it. But I also hold a different view toward parenting a toddler. In moments when I feel overwhelmed by Ethan acting out or being disobedient or challenging my authority—in short, while he's awake—I remember that the truth is, he's not having a hard time. I am. He is exactly where he needs to be as a toddler exploring the burgeoning limits of independence. It's actually easier to deal with knowing that a day's emotional climate is ultimately in my hands.

When I was little, we had this movie called Rigoletto (Feature Films for Families, holla!). Even after all these years, one line so profoundly affected me I still remember it. Ribaldi, the angry and hermetic yet musically inspired protag, tells a young boy dealing with a difficult situation to "change the way you feel." It is that simple, but it's never easy.


*     *     *
Tonight I sat at my desk looking out the window into our rather verdant backyard. I watched while a (nude) Ethan ran around squealing and laughing as Noah sprayed his feet with the hose and doused him in sudden "rain showers." 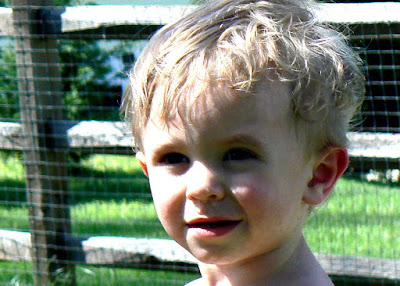 After a few minutes of observing, I stood up and joined them.
at 9.6.10

Email ThisBlogThis!Share to TwitterShare to FacebookShare to Pinterest
Labels: Ethan, Noah, parenting, Whose Body Is This? Disease

Thanks for posting this. Loved it, and loved the last sentence.

The question is...did you join them clothed or nude??? ;)

Great post. I have to admit when I read the last sentence I wanted to ask the same thing Sister Copinherhair did.

"I'm glad it's yours I have to live with." You know, that's a pretty good summation of marriage. Hugs to you, and still want to do a picnic one day with you and Little E.
L3

So glad you posted this. It so accurately describes how it felt and still feels (my son is almost 2 years old).

Mrs. Fuzz--I have a hard time posting things like this, but it's cathartic. I'm glad you loved it.

Socrates--That means a lot coming from a headcase like you.

Sister--I was clothed, although I told Noah I'd sunbathe topless if he'd get me a pool for the backyard.

L3--We actually had a backyard picnic lunch on Monday, and it was glorious. We definitely should, soon.

Tracy--Full disclosure: Our camera is busted, so that's a photo from last month. I'm glad you connected with this post.

This is so beautifully written and helpful for a new mom - I'm going to mentally tattoo this on my brain - "He's (or in my case, she's) not having a hard time - I am."

I love your writing, Erin! Dave and I want to have kids some day and I'm definitely nervous about the ordeal. I really appreciate how openly you share your personal experiences.

Thank you for using the words "mental illness" I have been diagnosed with several and people think it is shameful and don't understand. I don't think it is the stigma that people think. They seem appalled when I talk openly about it...

Also, my three children are all adopted and with each one i felt a deep feeling of depression, went to the Dr. and he said , Yes, you can, and you do have postpartum depression.

Your life changes in a moment.

Also, thanks for the "change the way you feel." It is that simple, but it's never easy.

You tapped into my feelings, thanks.

Yes you can "change how you feel" .... It takes some doing and obviously it depends on the severity of the illness. But I did it. And for the most part, I can maintain it. As long as it's two steps forward and only one step backward from time to time.
Lovely story Erin - as usual!
Kate

"angry to almost nothing"..wow. THAT is exactly how it is. I've got a 2 year old and now a 2 month old..it's a battle.
I also really appreciated your part about Ethan not struggling..that it's you. That's it's me.
Thank you for this post!