Yesterday morning I stepped in a cooled pile of puppy crap in the middle of my office. The irony of having a puppy and a toddler at the same time is I'm trying to get one to potty outside and one to potty inside, but apparently I'm not making my points clearly enough.

Every time I yell, "Nooooo! Go potty outside!" I have to remember to throw in a strongly emphasized "BONNIE" at the end. Whenever I find Ethan standing proudly peeing in the foliage surrounding any number of area homes, I can't shout, "Nooooo! Don't pee pee in the bushes!" without confusing the dog.

One of the few things I miss about working outside the home is that for 8  hours a day I only had to worry about controlling my own bodily functions, which was mostly a no-brainer.

There are perks, of course. Noah arranged a Day O' Fun for all the mothers in his life (me, my mom, his mom, and Nanny) that included a game at the new baseball field downtown. Ethan's enthusiasm alone was gift enough—he posed for a photo alongside Bolt, the mascot, for one thing. No, no. Let me rephrase. He mimicked Bolt, the mascot, for a photo. After a friendly high-five was exchanged, Bolt squatted to Ethan's level and pointed at the camera. So Ethan squatted and pointed at the camera, too. 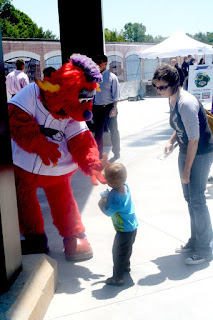 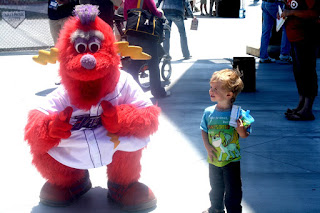 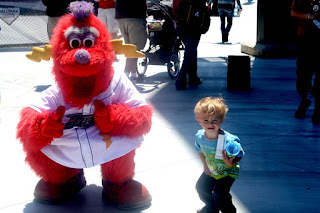 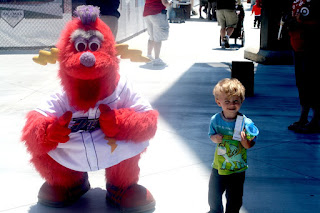 When the game actually started, Ethan shouted with the ardor of a Superfan through the entire first inning (as well as periodically throughout the next eight innings). His favorite remarks were, "Aaaaaaaaaaaaaaaaagh!", "Stiiike Won!" and, quite inexplicably, "Come on, Tony!"

Debbie and Richard arrived before us and ran into one of Debbie's former students, now a ball club intern. He asked if she'd be interested in a little on-field game between the top and bottom of the second. Bowing out by saying she was terrified of losing her wig, she brilliantly volunteered my mom instead. When we arrived, Mom was informed that she, along with two other contestants, would be blindfolded for a round of musical boxes outside the visitors' dugout in the second.

Although I considered seeing Mom goose-stepping blindfolded down the third-base line the true win, she actually placed first in the contest. When her triumph was announced, she toppled blindly off her box onto the turf, arms raised in an unabashed V for victory. She returned to our section with a bouquet and a t-shirt, as well as the admiration of all who bore witness.

You are totally, totally reinforcing my lack of desire to ever get a puppy. And helping me procrastinate on potty-training Malcolm. So, thanks!

Frankly, I would have loved to see both events, the pooing outside and the victory for your Mom(but not the stepping on cold poo event,) Hope you all had a fine Mother's day. The pictures are adorable.
Love, Paca

*Spazzes*
WINSTON-SALEM!!!!! :o
Another blogger from Winston?! INSANITY! (I'm from Winston, too, but currently in France.)
Sounds like great fun, at any rate! :)
-Aly