Mom and Dad brought with them a couple boxes of stuff from my old closet, stuff I had promised to go through for the past 6 years and didn't get around to, and man was I missing out.

Looking through my senior yearbook from high school, not only did I rediscover that I was voted third most likely to be a future host of Saturday Night Live in superlatives, I came across a number of apparently hilarious inside jokes I coined regarding things like sugar maples (AP Biology) and the Chinese mafia (strangely, U.S. History). In other words, I was a real twit.

This is my 16th birthday present from The Guys: 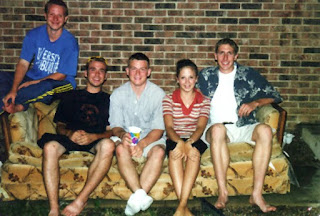 They were so sweet, they even delivered  it to my parents' front door. I put newspaper under my butt before I'd agree to sit on it. I made them take it with them after the party, and I'm pretty sure they left it on my friend Caroline's front lawn.

Oh! And proof that my skin does, in fact, have pigment: 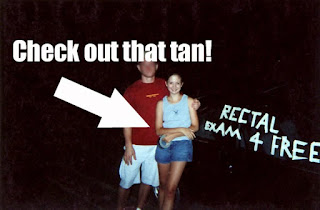 Incidentally, this is also proof of my shamelessness. To be fair (to me), I was with some of the Mosquito Squad Boys at the time, and we were decorating a friend's car with things he'd find hilarious: Duct tape, and a reference to something butt related. (This was the car of the man who coined the slogan "Avoid Shampoo, Demand Real Poo!"). (Also, he is a doctor now. But not a proctologist.) I don't know how that duct tape ended up in my hand, though.

In all those photos I did come across some sweetness as well. If you ever want to know who Ethan looks more like, me or Noah, mystery solved: 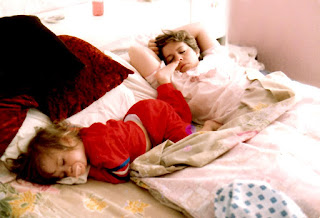 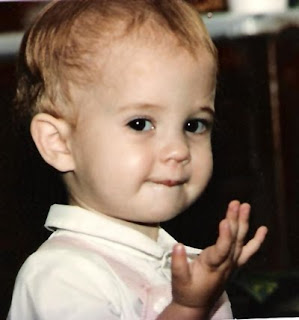 There was plenty of evidence of my writerly aspirations as well, but that's for another post. Let's just say there was a letter, penned by Young Me, addressed to Barbara Walters.
at 24.3.10

Email ThisBlogThis!Share to TwitterShare to FacebookShare to Pinterest
Labels: from the archive, telling tales

The pic of you and your mum is just too precious. Your little toes just beneath her nose! Again I say, TOO PRECIOUS!!

Funny. Love looking at old photos. Etahn is the spitting image of you!

I can't believe a picture of the couch survives. Is it a smell-o-graph?? I guess not or it would have eaten a hole through the box it was stored in long ago . . . .

thanks for the cheerful post. i needed something to brighten my day.

Oh my. What a cute teenager, and what a clone of yourself you produced!

I have identical pictures to these. I had this huge pack of guys I hung around in high school. They called me Snowflake. No, I'm not kidding.

I love love that sleeping picture.

Also... does one of those guys have a crazy Birkenstock tan?