I know I've been purposefully drawing out this whole NPR thing, and the reasons are various: Comedic effect, inability to condense, overwhelmement. Segue into an excuse: I'd like to apologize for not writing part 2 of the saga today, but I just can't. 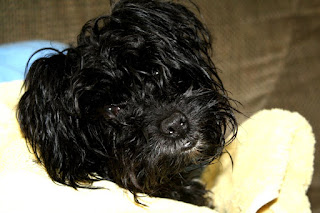 Yesterday morning I found a little dog. A Yorkiepoo she appears to be, and she doesn't weigh but five pounds. She was scrambling around in the road trying to catch someone's attention. I pulled over and opened my door, and she jumped into my lap and stayed there. Instead of heading on to the grocery store as planned, I drove to my parents' house. The little dog was absolutely filthy, a collar but no tags. My dad gave her a bath, then I called some of my friends at the Forsyth Humane Society. They scanned her for a microchip (none), took her to their vet for a physical, then sent me home with a small kennel, a dog bed, a bagful of toys and treats, and oodles of food. She is now asleep in a little fuzzy dog bed on the floor next to me.

I wish I knew her story. She is totally dependent on humans, yet she can't tell us what she needs—the complete vulnerability of a domesticated animal. She isn't a mutt, and she must have had a family. But what happened? She's either a long way from home, or she's not that far from a not-so-good home. Either way, she's here (for) now. We're calling her Dori. Ethan is enthralled and worried over her while she ate her dinner, though he tried to put her to bed at 7:30, which as I parent I can totally understand. He's also accidentally called her "tee tat" (kitty cat), so I'm pretty sure her size is confusing. Fair enough.


*     *     *
While Dori was at the vet, I drove back to my parents' house to pick up Ethan and do those groceries. As I was leaving, Noah called with the news that a WSPD corporal was found dead in what appears to be a suicide. I have no idea why, although we do know he was a 20+ year veteran.

If this had happened a month ago, I would still have been the person in charge of the bereavement committee for Behind the Blue Line. When my mother-in-law was diagnosed with cancer, I decided to resign. I couldn't handle the possibility of being at the helm of our response to another tragedy. What I didn't know was that the department would suffer another so soon. Although it's always too soon, in reality.


*     *     *
Yesterday evening my mother-in-law called. She received some good news. Her cancer—which they suspected was a combination of breast and kidney cancer—appears to be a recurrence of her original cancer 19 years ago. Which is I guess better because they know what they're dealing with, but also because her body hasn't fostered the growth of a new and different cancer. She begins chemotherapy on Wednesday morning.
I had no idea how infuriatingly subjective a science oncology is. It's not so simple as getting a scan or having a test run on a biopsy and the truth being uncovered. We recently watched Living Proof, a Lifetime moving starring the inimitable (and sort of odd-looking) Harry Connick Jr. about the development of Herceptin, a breakthrough breast cancer drug. Back when Debbie first had cancer, Herceptin wasn't an available option. The movie is heartbreaking, mostly because Noah's mom was one of the women who could have benefited from the drug but didn't have access to it, and she survived anyway. She is HER2+, which means her cancer grows and spreads more rapidly than most.

I'm saddened by the story of the Corporal. I'll pray that peace and understanding will eventually be with his family.

I'm also very hopeful for your mother in law. They have made great strides in dealing with this disease since her first bout. My cousin just battled it and is doing well. I will keep your mother in law in mind when I run the Race for the Cure this May.

i'm so sorry to hear of another tragedy within your police department.

i hope your mother-in-law's treatment goes well. your family & those affected by the Corporal's passing will be in my prayers.

sounds like dori will bring you a bit of happiness :) take care erin.

Hang in there...glad (?) about your mother-in-law's news.

As for the dog, I also discovered a lost dog. It was a few years ago, and it was a pug. I fell madly in love with him the night I took him in, but with the help of a local vet, I soon found his owner. Turns out the dogwalker accidentally gave him away. After I dropped him off to his grateful owners, I cried for a half-hour. Ridiculous, I know, especially considered his apparent penchant for snoring. Beware the attachment.

My gosh, what an overwhelmingly emotional time, E. I'm sending you and yours tons of love and big, engulfing cyber hugs. To Dori, too, of course.

Glad to hear about the positive news regarding your mom-in-law--she remains in my prayers.

You're amazing. I love your new puppy. I hope you keep her. It's so nice to have them around - especially when times are tough.

saw your link elsewhere...delighted that you named the wee pup after my sister!