What with all the rain and snow of late, the shifting grading of our hilly backyard has become evident. Actually, what's happened is, extending from the deck to the compost heap in the far corner of the yard, we've got our own personal dead marshes. Only with half-eaten vegetables and yard refuse instead of corpses. 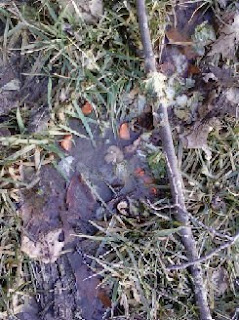 My mom doesn't get the concept of composting.

Mom: So you throw your old food into the yard?
Me: I don't just scatter it willy nilly. There's a heap in the far corner.
Mom: That sounds trashy to me.
Me: A compost heap is not trashy. All that crap we have shoved under the deck, that's trashy.

I will admit that the dead marshes have affected the good standing of the compost heap. See, rather than put on waders and slog through the muck to get to the far corner of our third-acre lot, sometimes I've been known to toss a bit of veg or an old orange from the deck. Now, if I've got a good collection of compostable items, I will make the Frodo-like journey through the marshes (why did the hobbit cross the marsh? to get to the compost heap, etc.). But I just don't see the point when all I have is a half-gone head of lettuce rotting on the countertop.

Now when it comes to a baseball, my ability to hit a target is uncanny. No, really. But when the object I'm throwing is less...spherical...well, there's no guarantees.

The other day I called my parents' new neighbor, Ricky, who happens to be a landscape artist. He said he'd be happy to come take a look and see what he could do about fixing the yard's grade. Which means I'm going to have to do a sweep of the marshes and remove any bodies rogue cabbage leaves and mushroom slices. You know, so he doesn't think we're trashy.
at 23.2.10

Email ThisBlogThis!Share to TwitterShare to FacebookShare to Pinterest
Labels: adventures in domesticity, family, the Southern experience

I'm picturing (a more femininely striking, of course) Hoggle in brightly-coloured galoshes, squatting, skittering, and muttering about various vegetables. If it weren't for the wrench incident, I'd ask why Ethan isn't helping (his proximity to the ground making him ideal for spotting things), but--again, thanks to the wrench thing--I realize *that* would be a silly question.
Still, his description of the inedible soup of your back yard is fun to imagine. . .

Not From Lapland said...

ha ha, there's going to be a lot of tidying up to do before it can be tidied up, huh?

I can't see how getting a painting of your garden is going to help ;-)

We put our compost in a plastic bin. Might be a good investment ;).

The visual I have is of you in an old nightgown and barefeet out on the back deck, hair looking like a crows nest, maybe Ethan on your hip, as you whip a rotten head of lettuce across the back lawn.

I don't see anything trashy about that. :)

Oh, I forgot about Hoggle! I love him!

My neighbors bought a composter(?). It supposedly does something to help it along and then all of your carcasses are contained. ;) I'm sure a plastic bin works too...