And now, for the Winner of the 2010 World's Worst Parent Award

There's plenty for me to talk about—how this is my last day of work, how we helped my parents move into their new house this weekend—but I just can't ignore the elephant in the room. Or should I say, the Allen wrench in the poop. Because yes, apparently my son swallowed a tool last week.

Let me pause here to give you some crucial information: This incident was all Noah's fault.

You see, Ethan and Noah the Defendant were in the child's room playing with some Allen wrenches. Mistake No. 1. Ever since the big boy bed debacle, Ethan has been obsessed with "fixing" his crib, a task that includes hammering crayons into screw holes using Pat the Hammer... 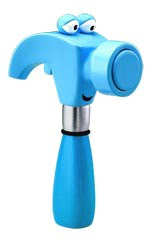 ...and poking at them with the Allen wrenches. So when the Defendant picked Ethan up to change his diaper, it is my contention that he should have noticed the child placing the small Allen wrench into his mouth.

And then, when the child did a couple hard swallows and pointed to his open mouth when asked "What did you do with that little tool we were playing with?" it is my assertion that we the Defendant should have believed the child. Of course, we frantically searched his bedroom and found a small Allen wrench in the rug. Mystery solved!

Until two days later, when my mom texted me to say that she'd just found an Allen wrench in Ethan's dirty diaper. Commence flurry of text messaging.

Me to Noah: UM HE DID SWALLOW AN ALLEN WRENCH TWO DAYS AGO
Noah: No way he pooped it out???
Me: YES AND NOW I AM MAD AT YOU AND WANT A DIVORCE
Noah: Wow I'm speechless.
Me: YEAH WELL I HAVE HAD TIME TO REGAIN MY SPEECH AND THIS IS YOUR FAULT
Noah: I am very very sorry. When did this happen?
Me: Half an hour ago. He was in his crib crying like his heart was breaking and mom found it in his poo.

Mom: What did Noah say about Ethan?
Me: He was horrified and penitent, especially after I threatened divorce.


Then Dad jumped in with a valiant effort at deflecting blame.

Dad: Don't take your anger out only on Mobi (nickname, long story) as you knew the wrenches and I knew the wrenches were in Ethan's room and nobody picked them up.
Me: Okay. I will take it out on you too.
Dad: We all blew it on this one.
Me: Okay. But mostly you and Noah.
Dad: Don't think so.
Me: Kev, don't mess with me on this one. We could go down the blame road and point fingers at the tool company, or even Allen, but ultimately it comes down to Noah. And you.
Dad: I think the blame should stay on Allen.


After that was settled, I was left with one of the most horrible feelings imaginable: The what-ifs. For two days that tiny bit of metal moved through my precious boy's delicate little digestive system. Anything could have happened! A torn esophagus! A torn intestine! Not to mention the choking factor (shudder). I feel like I've failed Parenting 101 and only by Providential grace did it not end in disaster.

I guess I thought we'd covered it with Yummy Yucky (burgers are yummy, boogers are yucky, et al.) but obviously the book's core message didn't stick. And I mean, the kid is a week away from being two. I just didn't think that a small person who accurately uses the phrase "No way," with attitude, would still be at major risk for swallowing inedible objects TOOLS. My adult brain doesn't comprehend how a child who knows the proper use of a hex key would also be tempted to eat it.

We've saved The Item in a plastic baggy to take to the pediatrician and confess our sins when he goes for his two-year checkup next week. I've been monitoring his behavior and his doo doo for abnormalities as a precaution.

Although the ultimate precaution would have been not allowing our son to ingest an Allen wrench.
at 8.2.10

I like Pat the Hammer. And having watched dogs ingest and excrete any and everything, I've started to believe that digestive systems are stronger than we can imagine.

Or I would except you'd have to tell on me too, William nearly swallowed a coin last year and yesterday? His number twos were GREEN because of the blue gel crayon he ate.

The human body is an amazing thing, but more so when we're kids when we can swallow hand tools and just poop them out and our skulls are still a little mushy and we bounce, as long as it's under a 3 foot fall.

Oh Lord! I'd feel exactly the same way - but you'd have to wrap them in cotton wool and hang them from the walls of a padded cell to avoid the risk of this kind of thing happening.

This adds a whole new meaning to my Mum's assertion that with kids "you only get out what you put in. I feel for you, my third swallowed a 5 pence piece when he was old enough to tell me in a fully structured sentence what he'd done. We never saw it work it's way out - it's still in there for all we know! He'll get a full body scan at Gatwick in the summer so I figure if he doesn't set off any alarms we're safe enough :)

since i don't have kids, i don't know how you feel. the only thing i've experienced that is remotely close is when my puppy swallowed a couple stuffed animals - one caused a pet ER trip & i was a freaking wreck.

you sound like a great mom and someday when i have kids, i'll ask you for advice :)

Pat the Hammer is too cute.

But wow...swallowing and pooping a wrench--that's gotta hurt. Hope he gets lots of hugs.

Eh, I swallowed a penny when I was two, and besides the fact that my mom is now terrified of anything less than a nickel, all turned out well. And kids are sneaky little buggers--don't blame yourselves. Especially since all seems okay now. (I imagine he would be complaining of tummy pain if he had nicked/irritated anything in that cute little body.)

Don't beat yourself up about it. All kids do it. Two marbles and a quarter later and our son is just fine. But I do remember the picking through the dirty diaper days...the fun days of parenting. Good times!

Okay, I know that this is disasterous, but the way you relayed the story made me laugh so hard... You'll tell that story at his 21st and be all like! And look! hes alive!

and then if/when the second child is a week away from his/her second birthday and swallows a screw you'll be all, "That? That's nothing! Your brother digested and pooped out an allen wrench. Slacker."

Please tell me you cleaned off the offending tool prior to sealing it in the baggie? Just checking.

Welcome to motherhood... Motherhood with boys. Luckily, the worst I found in a diaper were chewed bits of the foam letters that stick to the tile around the tub. Thank goodness for all involve that it all came out good in the end. Yes, pun intended.

You aren't the first... don't sweat it. I know someone whose kid swallowed something metal and they used a magnet on his belly to track its progress on the way down. Imagine that!

Wow. All this effort to make my incident involving our little boy escaping from the house on my watch and being missing for 5 minutes look not as bad--I really appreciate it.

Glad he has a strong stomach--he'll have no probs at the school cafeteria.

you sound like a great mom.
I cant wait to see what the doc says,glad it came out ok!

My friend's dog was acting weird. They took her to the vet. The vet did an X-ray and guess what was clearly visible inside her stomach?

So just be glad this thing was poopable.

OH my!!! Whew!!! Glad it came through the plumbing all right. Definitely update on the doc visit. But in no way, shape or form are you a terrible parent. Oh my gosh, kids and non-food objects in their mouths goes so hand in hand, for years. I still catch my kids putting all kinds of stuff in their mouths that grays my hair. At eight and six years of age! They'll be walking/running about the house and I'll see them chewing. My first thought is, Why does such-n-such have gum? She doesn't like gum! Then it clicks, "Get that [INSERT NON-FOOD ITEM HERE]out of your mouth NOW!"

The amount of comments this post has generated has confirmed my deeply held belief that the topic of bowel movements is ALWAYS discussion worthy.

I swallowed and entire baby pearl necklace when I was little. What mother puts jewelry on a child too little to even know what it is? But did we blame her ........Noooooo lol. But here I am 57 yrs old and still kicking. Spit happens ya know? :)

just found your blog and i am lovin this story!!