Tis my beloved's birthday. Aside from rapidly hurtling toward 30, he has a number of other qualities worth mentioning.

Attractive Nerdery — Never was there a bigger Star Wars–J.R.R. Tolkien–Battlestar Galactica–video gaming–Dwight Schrute loving apostle of all things Nerdtastic who was just so darn good looking.

Subtle Badassery — Since becoming a police officer, he has attained new levels of self-confidence and assertiveness I never would have guessed possible. He might look like a muscular 17-year-old vampire heartthrob, but don't be deceived. In reality he's a muscular 27-year-old human who won't drink your blood but could certainly tear your head off. DO NOT MESS WITH HIM.

Good Humour (differentiated from the ice cream by the British insertion of "u") — He appreciates a well-placed "That's what she said" as much as the next guy, but his internal encyclopedia of witticisms is more than a little impressive. Esoteric references to aforementioned Nerdery are a favorite: "Laugh it up, Fuzzball"; "This wine has an oakey afterbirth"; etc.

Athletic Supporter —And by that I mean he was totally encouraging that time I did a triathlon. He even tweeted my progress!

Role Modeling Abilities — He pulls off fatherhood with panache. He rarely gets frazzled, he reads to the boy every evening before bed, he mostly maintains a straight face when disciplining. On days when he's home alone with the child, the house is typically in order and the baby is typically in good spirits by the time I arrive. Which makes it difficult to argue with his nutritional standards ("What did Ethan have for lunch?" "Oh, some popcorn and Cheez-Its, a few M&Ms, and half an apple."). 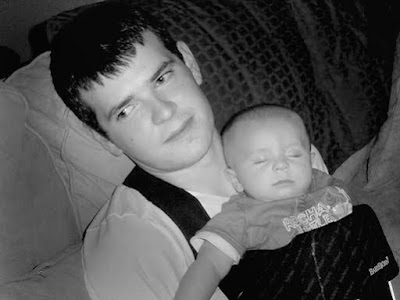 Heroic Tendencies — He's a police officer. A decent one. And he also teaches kids to be decent.

And now that I've given you many reasons why today's birthday boy is Good Marriage Material, I'll kindly remind you HE'S MINE SO BACK OFF.

Happy Birthday, Noah! Hope you all have a Merry Christmas!

This is soooo sweet and cute! I hope he reads it and BLUSHES! Happy Birthday Noah!

Spoken like a lady after my own heart. I love my husband too but if another woman tries to step, I assume my "I WILL CUT YOU" stance.

What a lovely and loving tribute to your hubs. I'm sorry that he is a Saggitarius/Capricorn cusp baby, but I'm sure these other qualities make up for that.