Just when I thought this whole blogging thing was starting to bring me some acclaim (I don’t know if you’ve heard, but I’m a hit in the UK—I’m talking BIG, like the way David Hasselhoff is popular in Germany)... 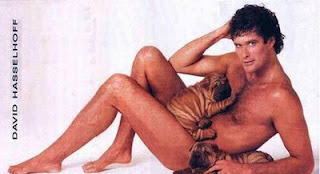 Yes, that poor Shar-Pei is sitting on The Hoff's wiener. And I have no idea why.

Last night, Noah had a front row seat—literally, Row 1—to the Panthers vs. Dolphins game as the personal guest of The International Sensation…the NFL Hall of Fame Superfan...Catman. 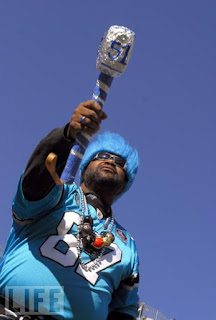 THE Catman, the Ultimate Panthers Fan to whom Fox gave a truck after they goofed him on air a few years ago (incidentally, at a Panthers–Dolphins game).

See, Catman works as a counselor at the elementary school Noah is teaching in at the moment, and they happened to meet and become friends. So when Noah told me Catman offered him his extra ticket for last night's game, and that he'd get to ride to Charlotte in the Catmobile, I of course encouraged him to go. Because I AM THE WORLD'S MOST AWESOME WIFE.

Unlike the time I ran into Steve McNair, Noah valiantly played it cool—apparently Catman's celebrity can be annoying to him, because other fans constantly come up to him during the game to get photos. However, Noah did manage to discreetly snap a photo of Catman in medias res. 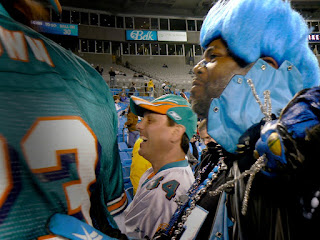 So he may have played it cool with Catman, but let's just say his attitude this morning was a little...Hasselhoffish. 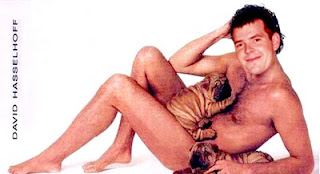 He told me, casually, about how Mushin Muhammad came over to chat it up before the game. 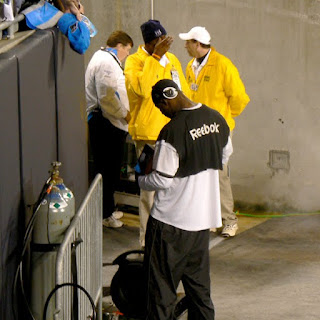 Oh, he also mentioned how friendly the cheerleaders were. But he got some pretty amazing photos, so I guess I can deal. 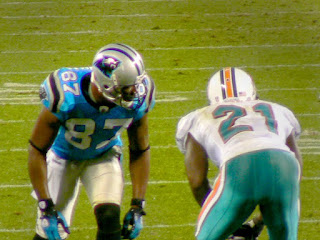 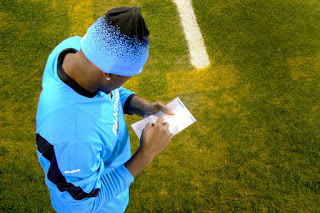 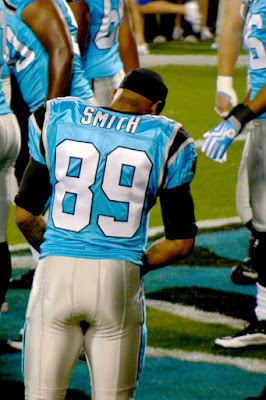 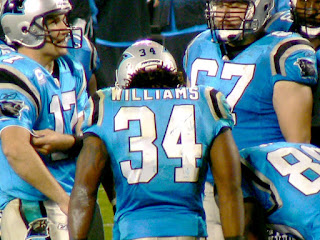 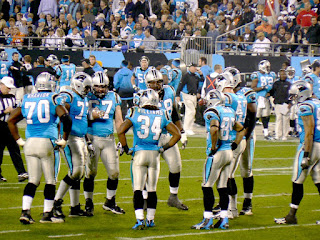 Email ThisBlogThis!Share to TwitterShare to FacebookShare to Pinterest
Labels: brushes with fame, Noah, the Southern experience

I did not approve of that Noah Hasselhoff chopjob. And no one has permission to use that anywhere for any reason.

The Noah Hasselhoff is an instant classic and I might add a little disturbing since this is exactly how Noah lounges around the house (sans Shar-Pei) and we have to tolerate it.

I consider myself an expert in all things Hasselhoff, but admit I have never seen this poster! What an unnatural pose AND those poor puppies! Hilarious.

And THIS is why I love your blog. David Hasslehoff, the Catman, and strange rashes. Your life is just funnier than mine. I'm admitting it now.

Where are the pictures of the CHEERLEADERS???

Damn those cheerleaders. They're even easier to despise when they're friendly.

On a kind-of-but-not-really-related note, check out the Amazon reviews of David Hasselhoff's album "Looking For--Best of David Hasselhoff." There is a common theme amidst those 1,048 reviews. If you can find it, you too may fall off your kitchen stool in hysterics.

Because of Love said...

My husband and I were at that game last night. However, our tickets weren't as good as Catman's...

Poor Catman--a home game and he is surrounded by Dolphin fans (at least in the photo).

The kids enjoy watching the SpongeBob Movie while we are cruising around in the family mobile. Who would believe that a 3 year old with difficulty speaking can spout out the words "David Hasselhoff" without much difficulty? Ah the magic that was Hoff's guest appearance with Patrick and Sponge Bob.

wahahaha I love it! THis is sooo funny

You should've posted a warning before that photoshop of Noah.

I'm afraid that image will still be in my head next summer.

Noah, sorry in advance for any strange looks you get from me. The subject of puppies will never come up on the walk. Never!

Amy has now changed her allegiance from you to Noah. sorry.