Strange things are happening to me

I have loads of things to tell you since my parents arrived on Thursday afternoon. Such as my Dad texting me frantically on Friday to say that Noah's Xbox had the red ring of death but he didn't do anything but turn it on he swears (update: Xbox fixed itself miraculously). But I'm just not up to it right now.

Thanks to all for your dreamy time suggestions. I took a sick day today, though, because I've been having some other weird symptoms. Like falling asleep in the bath at 2 o'clock in the afternoon, for instance, after having slept for nine hours the night before. So I went to the doctor, where I promptly fainted. He ordered some tests.

Meanwhile, I'd like to thank Mrs. Fuzz for giving me the Honest Scrap award. 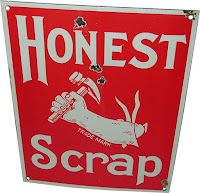 I have to list ten honest things about myself, then pass along the award to seven other bloggers. Please forgive if this is a repeat award for some of you. You're all so talented, I can't keep track.

Ten Honest Things About Me:
And now, I'd like to present this award to...

Dan of All That Comes with It, because he's always honest about being dishonest
Sal of Already Pretty, because she tells it like it is when it comes to body image
Jules of Pancakes and French Fries, because she got permanent marker out of sofa fabric and didn't pretend it was easy
Lisa of Mastering the Miles, because she's always up front about her aches and pains, although I'd like to remind her that she has aches and pains because SHE RUNS LONG, LONG DISTANCES
Jen of Harried Mom of Four, because hello, she doesn't have time to tell tales
Copswife of Ordinary Life of a Police Wife, because she doesn't ever sugarcoat the tough aspects of being married to a cop
Christopher of The Warrior Poets, because honesty and integrity are totally what he's all about
at 4.11.09

I want a king too. But right now I am remembering a song I liked by a group I cannot name, something along the lines of "Never should have gotten the king sized bed, all it was really good for was the real good sex."

Totally bothering me that I can't remember that group's name right now...

Had to laugh about the dog shaving comment. A few years before our Springer Spaniel died, I finally gave in to having her fully shaved. I should have done it many years prior--everyone was a happy camper after it was done.

Awww, thanks beautiful Erin! I am UTTER CRAP about doing memes, but will write myself a note to complete this one ...

mmmm cinnabon its so bad and so yummy!

Erin, thank you so much for thinking of me! And now I have something to blog about other than my kids :) Hope the fainting isn't too serious...

And thanks for the shout-out, pumpkin!

I always wonder the same about our queen mattress and wish for a king, until king owners tell me what a pain it is to change the sheets. They all say don't go there!
thanks for the baby congrats!