I’m glad I didn’t mention any names in yesterday’s post, because after the fiasco that was our bike ride, two things were agreed upon: 1) that it would have to be blogged, and 2) that I had to employ aliases to protect those involved.

So that dude who lives in my house, who from hereon out we’ll refer to as Nav (for Navigator, because Officer Mike Honcho was too obvious a cover, he said), and that kid who lives in my house, who we'll call Baby Face, went with me to bike with two gal pals, who we'll call S.V. and Aisha. Because those are the names we came up with while we were stranded on the side of the road in Bob-knows-where as darkness was rapidly falling.

But I’m getting ahead of myself.

Nav, Baby Face and I arrived at Tanglewood where S.V. and Aisha were getting geared up for our 6-mile bike ride. I pulled out the course map (The Official Course Map from The Official Race Site), which looked basically like this: 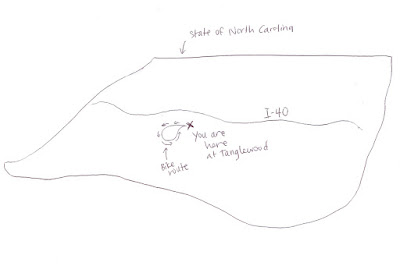 Showing his true leadership abilities, Nav took up the mantle of being the map-keeper, since he was our best and only hope for locating the course.

We set out and immediately took a wrong turn. I know this because we dead-ended at a lake after coasting down a very large hill. After regaining our bearings (“Well, if you consider that The Official Course Map says the road into Tanglewood runs parallel to Canada, and the sun is in the two-thirds Easterly quadrant, then the correct route must logically be…”), we headed back up the very large hill, and set out again, this time in the right direction, which according to The Official Course Map was "nearish to the railroad tracks sort of."

As to what went wrong, all I can say is at some point we were supposed to turn at a road whose name on The Official Course Map was taken from an archival rendering of the area dating back to 1867. Because nowhere on any street sign (which were few and far between, since we were heading deep into the country) was written the five-digit number that The Official Course Map designated as The Name of the Street That Is the Correct Way.

I’ll skip over the next bit, which included about 25 minutes of cycling pretty speedily in the wrong direction—past frightening and probably haunted shacks and several horse farms—and getting shouted at by a redneck honky in an ancient Ford Bronco. Instead I'll go straight to the part where we saw an old sign welcoming us into the next county.

We pulled over to regroup. Nav was noticeably irritated, in part because Baby Face was whine-crying almost nonstop at this point. Aisha actually didn’t rest but instead rode in circles because “if I stop I might not get started again.” S.V. brought up the rear, as her gears kept getting stuck.

The most logical course of action was decided upon: Go back the way we came. Shortly thereafter we lost S.V. Aisha, in the manner of a battlefield friend, went back for her. I caught up to Nav and Baby Face and relayed the increasing direness of the situation. After a few minutes of discussion, Nav and Baby Face took off to get the truck and come back on a rescue mission.

And that's when I realized that I was standing next to an old cemetery. Since I've avoided being stranded in cemeteries since childhood, this was disconcerting. What was more disconcerting was when I realized I recognized the place...because I'd gotten lost and pulled over here once before, while driving. Disconcertinger even than that was the fact that I now knew we were closer to my house than to Tanglewood.

After another 10 minutes of standing solo on the side of the road, a small red truck whizzed past, carrying in its bed two bikes (one mangled), a shouting Aisha and a bruised S.V. S.V.’s gears had locked, her back wheel stuck, and she went flying over the handlebars of her bike, bending them in the process. Aisha had found her, about 4 miles back, carrying it.

For the next 30 minutes we waited in the church parking lot. There was a lot of speculation (“Is that Nav’s truck?” “No.”) (“I think we might die here.”)(“Maybe that redneck honky was trying to tell us we had missed our turn.”) and stretching (“I actually feel pretty good right now. But that might be because I’m numb.”). Fiiiiiinally, Nav pulled up to a great deal of cheering just as the sun was sinking below the horizon.

The cure for such a fiasco? A sweet baby’s head to kiss, pizza delivered hot to your door, an even hotter bath, and some primetime tennis. Also, good friends and a great husband who’s been known to come through in a pinch.

This is why I prefer my couch and house to the great outdoors.

haha... now THAT is an excercise routine.

I think you win the "Suckiest Bike Ride Award." I mean, my trip was long and tiring, but overall, it was a smooth trip. Also, there were no cemeteries to speak of.

What a clever way to elevate your heart rate without all of that non-stop pedalling nonsense.

I would have echoed your anti-cemetery comments, but after moving to a house where the backyard overlooks an open field and then a graveyard, it has been a plus. But then again, I don't watch scary movies.

Bruised, not broken. My cure sounds different than yours, yet is still yielded the same result, I guess I'm over it and ready to try again. I will request that you, Nav and Aisha please be present for all future rides. You guys are all heroes in my eyes.

And, I am being quite sincere in sentiment, even if I had to pick myself up from the floor, wipe away the tears, and choke back the laughter to type.

Talk about an adventure! Glad to hear you didn't get eaten by graveyard zombies.