An epic tale. One for the books. 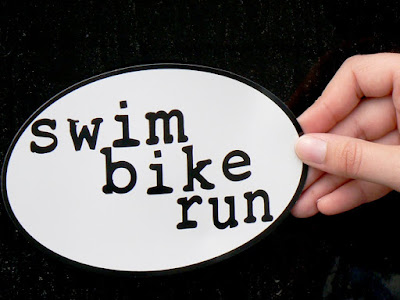 First, there was the swim. 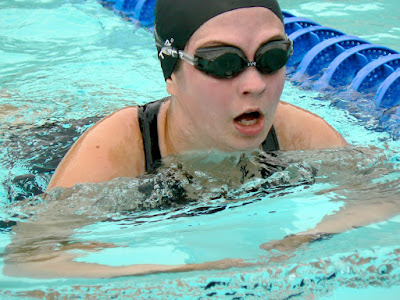 I felt most prepared for the swim, but the reality is that swimming in a snaking pattern through an outdoor pool full of 50 people in late September is a very different scenario from swimming back and forth in a positively Mediterranean-temperatured indoor lap pool with little more than a be-noodled elderly woman creating waves. I definitely didn’t panic, but I also went way slower than I normally do—like, a full minute slower per 100 meters.

Upon reflection, I realized that I wasn’t so much uncertain as unfocused. It was distracting to share a lane with several other people and then have to think about the courtesies of passing or being passed. I found myself looking for Noah at the end of each lane instead of just listening for his cheering, and I seriously briefly considered stopping to wave to Ethan on the last lap before realizing that doing so would be utterly ridiculous. More ridiculous even than my Baywatch-style exit of the pool: 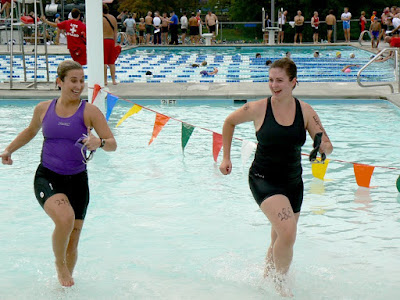 Want to know something cool? That other Baywatchish babe was one of my training buddies. She was several swimmers behind me at the start, but rocked her swim so hard she finished up on my heels.

Then, there was the bike. 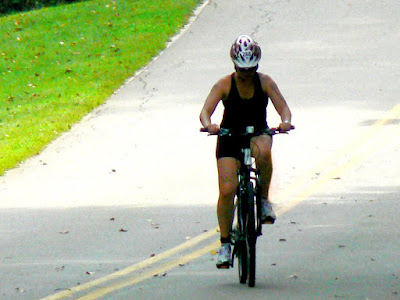 I had a little more than 12 miles to figure out that having a road bike makes a lot of difference. My bike is a hybrid, which means it does well on roads and on easy trails, but I definitely could have benefitted from tires made specifically for the road. What I have is not a race bike.

The first part of each of the two loops was the hardest, pedaling on a gradual incline against the wind, a wind that I’m convinced was created by the steady rush of people on road bikes passing me. I only passed one person, and said “Good job! Keep going!” to her as I did. I got the idea a few minutes earlier from a smiling 50-something woman* whizzing past me on her second lap who yelled a convivial “We can do it!”

*By the way, they wrote our ages on our right calves, so we could either a) be inspired to work hard and be competitive, or b) slowly deflate in despair after getting passed by a 63-year-old and an 11-year-old both. True story.

I found myself admiring the lovely houses on the far end of the loop, enjoying the rush of the wind on downhills, giving encouragement to the serious cyclers as they passed me, waving and shouting thank-yous at people who came out of their neighborhoods and onto the street corners to bang on pots and pans while yelling supportively. Again, with the focus. Then I’d remember “Um hey, this is a race, not a hayride” and shift into a higher gear. I even managed to tell a joke when Noah and my friend Jen coaxed me up the last horrendous hill just before the transition area.

Finally, there was the run.

After getting down off that bike, my legs had nothing left. 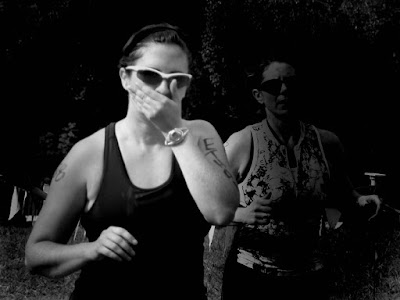 I tried jogging, and I just couldn’t do it. That was my only moment of real self-doubt. But then I thought about my angels. 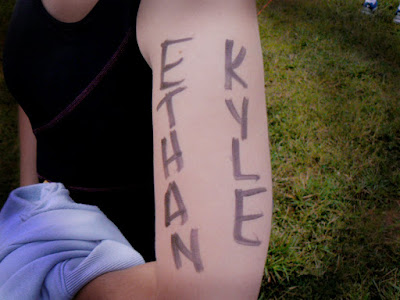 See, this was the NC Angels Race. You dedicate your triathlon to some person or people who have inspired you. Many racers pick loved ones who have passed away, but you don’t have to. I picked Ethan and my brother, Kyle.

Ethan and I had a rough time of it in those last weeks of pregnancy. We went through a lot together, and now I can’t imagine life without him. One of my biggest fears is that he’ll never know how much I love him, how much he delights me and inspires happiness in me, and what a privilege it is to watch him grow into himself.

I also picked Kyle because he’s been through an awful lot these past few years. He had a terrible leg injury in high school that I’m certain changed his life — he almost lost his leg, in fact. Aside from all the infections and surgeries he underwent, I can’t imagine the isolation and fear and disappointment he felt. Then came college, and a whole new set of challenges and issues. But I’m proud to say that through a lot of hard work and despite his tendency to not believe in himself, Kyle had his most successful school year last year, perhaps ever.

Every time I thought that I couldn’t do it, that I couldn’t possibly put one numb foot in front of the other numb foot, I’d remember Ethan and how I’d do anything to express what he means to me, and I’d remember Kyle and everything he overcame. Then I’d put one foot in front of the other, and keep going. "For Ethan and Kyle!" the race starter had yelled as I kicked off from the wall to put the whole crazy thing in motion.

Jen met me at the bottom of That Horrible Hill and jogged alongside me, convincing me to press on, that the finish was just around the bend, then she veered off to let me do the last hundred yards on my own.

I was slow, no doubt, but I did it. Even though my bum muscles hurt so bad they began to draw on the pain reserves of my ass bones pelvic girdle. Guys, are you aware of your gluteus medias? Because by the end of that race, I certainly was. Still, I managed to spare a few seconds to go grab Ethan’s hand before jogging across the finish line with a smile on my face. 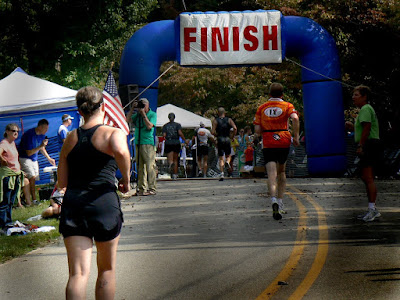 Both my training buddies completed the race as well, and I was there to cheer them on as they crossed the finish, victorious. 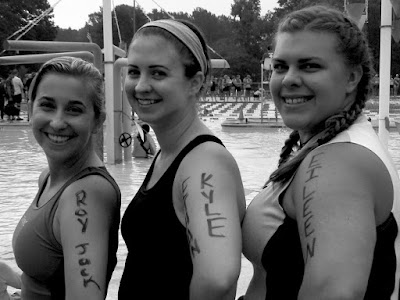 The thing about doing a triathlon on a Sunday morning is it makes Sunday afternoon feel like a huge underachievement. For me, anyway. Perhaps because I was so decidedly uncompetitive during the race.

I think I’ve been bitten by the bug, though. My “I finished!” euphoria quickly wore off and left behind the I-want-to-do-better mark, one that like a bruise has become more intense with each passing hour.

Do I think I could ever be placed among the early-morning-start elites? The triathletes who fly across the pool doing flip-turns and finish the whole thing in less than half the time I did?

I don’t know. I’d have to come a long, long way. But after this Sunday, I’m starting to believe that I can.

This was great! I'm proud of you. And laughing at the image of the be-noodled lady...

Sore bums and all we did it!

Forgot to give a special shot out to the awesome camera man!! Nice work.

So proud of you! Congrats!

That is so AWESOME Erin! HUZZAH!

Congratulations! What an amazing achievement.

We are very proud of you. What an awesome achievement! The three of you look like seasoned athletes!

You totally can. You can do anything you set your mind too, lady. HUGE congrats on finishing your first triathlon!

Congrats--glad all of your work was rewarded.

Are you sure it was not the bike helmet that slowed you down (I hope you took out the extra 10 lbs. of padding)?

Erin you have translated your experience so well! I admit I got a little teary. My hubs bought a racing bike last fall with the intention of training toward a tri-athalon. The bike is like an art installation in our hallway - I dust it weekly. Good for you for seeing your race through!

WOW - Congratulations! I would have died in the pool - but you got out and rode and ran! Now I want to go run a race. Thanks for that!

You have earned my undying respect for this. I doubt I could run longer than a mile--even in a life-threatening situation.

I am so very impressed. You may bathe in my bathtub anytime. A triathelete has earned her right.

For some reason I didn't see this at the time.

Well done. You should be very proud of yourself.

You should be certified clinically insane as well, but proud none the less.

Woohoo! I SOOOO know this feeling.

And I'm with you. There's something addicting about finish lines...