...and my profoundest apologies for not naming my last post "The Beagle has landed," per JJ Daddy O's suggestion, and Dan's second.

In my mind, I have an excellent series of blog posts that aren't at all braggy ("Here's a photo of me drinking a hand-delivered mimosa on a private beach!" although I do have photo evidence of just that), that are clever ("The first rule of traveling with a toddler: Don't."), a little sentimental ("And driving by the hospital where I was born, I felt a twinge of nostalgia in my heart"), with a dash of Californian irreverence to offset it all ("Duuuuude, Cali was so rad!").

But alas, I went to work at 6 a.m. today, less than 12 hours after arriving home. Or at least my body thought it was 6 a.m., even though it was 9. So all I can muster for today is the irreverence, thanks to Noah's savvy eye for photography, which also happens to be a small hint of things to come: 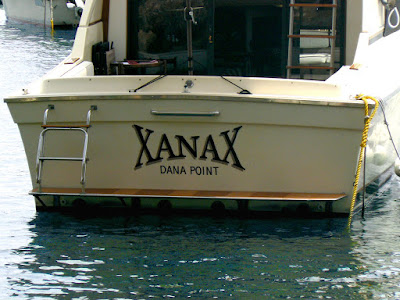 P.P.S. As I'm dowloading our photos, many of which I coaxed Noah into taking, I'm seeing a set of several photos of Ethan in a diaper eating something off our friends' coffee table with a soccer match on TV in the background. Cute, but doesn't really capture the vacation part of our vacation, since that's what happens at home at least once a week. It appears that Noah took several lovely photos of some gulls, but also, inexplicably, a pigeon.

Two words: Eye-fi card. It automatically uploads to Flickr(or Photobucket or whatever) and your home pc all the photos (and videos) you've taken. Awesome.

JJ—Duuuuuude thanks for the tip! Also, I'm a sucker for hyphenated words.

The Beagle Has Landed. You missed an opportunity there, E.

Welcome home, and hope you readjust to EST soonly!

My brother-in-law lives in Dana Point now. We just went to OC and LA for a week and a half in July. Awesome. - Tammy H.

Tammy H.—I'd like to go for longer next time. A week just isn't enough.

Re: P.S.: YES. I'm a recovering lurker and I read your blog every other day (because that seems to be your schedule), so I was so glad to see you were back!
And yes, traveling with babies sucks. I've done it.... except I was the big sister, not the mom, but I was still traveling with 2 under 4 and my mom, so I was still stuck with a difficult, my-ears-are-plugged-up-and-it-hurts-so-I-want-everyone-to-know-it 3 year old. And while cross-country sucks with babies, try continent to continent. With multiple stopovers. Believe me, you start wanting to hand-deliver mimosas to the kids lol.
Much love and again, I love your blog!
--Isis

Yay! You're back! i've missed your posts. they always cheer me up. And yes, the beagle has landed. Awesome.