For doing my homework, I will award myself one Schrute buck 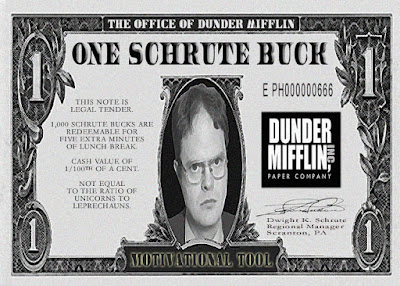 Well kids it's that time of year again: Tonight I start my fall master's classes. I decided to only take one this semester, which turned out to be a major kick in the crotch of our bank account, because my university is one of many (or most?) that has embraced the tiered-scale method of tuition. And they've tiered it in such a way that taking one class is essentially the same tuition as taking two.

As has been well established, I'm no math genius. But somehow "one for the price of two" doesn't seem like a great deal. Whatever.

I even considered skipping a semester, on principle, but a cooler head prevailed (Noah's), so back to school I go.

Speaking of school, guess what? Noah got that special assignment. His first lessons—three fifth-grade classes at the brand-spanking-new (wait, no spanking, just new) elementary school around the corner from our house—were today. I think I got a taste of what being a teacher is like last night when Noah ran out to buy some stickers for his students (I hear bribery having a reward system is a great teaching tool) and some balloons he needed for the lesson.

Me: Is this about drugs? For the anti-drug part?
Noah: No...
Me: (in best Dwight Schrute voice) Have you ever...pooped...a balloon?

Turns out the balloons were for an exercise about self-esteem. How does one use a balloon to teach about self-esteem? I'll give you a hint: Last night I drew two cartoonish eyeballs on a yellow balloon named Stanley. Figure that one out.

Project for today: Go buy yourself a balloon, blow it up, draw on it with a sharpie, then let it slowly deflate, and enjoy the magic that ensues. You're welcome.
at 27.8.09

Email ThisBlogThis!Share to TwitterShare to FacebookShare to Pinterest
Labels: Back to School, doing the math, Noah, policework

Um, I saw that Twitter update regarding the, uh...how to put this delicately...cavity search and I was afraid.

You tell Noah to be careful out there. This could be his most dangerous assignment yet.

May—He made the mistake of The Open-Ended Question, i.e. "And what might I need to wear rubber gloves for?"

Sarah—I've tried several times to convince him that we need to start a cartel.