Seeing Foxes: Learning to Be

Seeing foxes is a sporadic series on paying attention to the divine in the everyday, which was inspired by my good friend Austin and his blog. Previous entries can be found here, here, here and here. 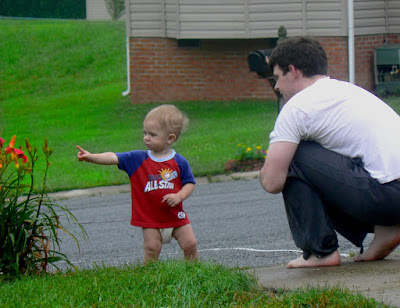 I don't like to admit it, but Ethan's special affinity for his father sometimes makes me jealous. Noah gets to spend so many more days at home with Ethan than I do, and I know it's only natural that their bond would be different. Ethan loves being near Noah; I can tell it makes him feel safe. When Noah was laying on the living room floor doing flutter kicks, Ethan looked concerned and gestured to sit on Noah's lap. When Noah was finished with his strange-looking exhibition, he lifted Ethan into his lap, and Ethan sighed with contentment.

Yet Ethan and I have our moments. This afternoon, we danced together in the living room, stomping our feet to a made-up tune, enjoying each other. We wrestled around with Cody on the bed; Ethan climbed on my back for his first ever "horsey ride."

Then this evening, when we were sitting down to eat, I asked Ethan to go get his juice. As he toddled over with the cup, Noah reached out to take it from him and place it on the table. But Ethan squealed and drew back, then took a step toward me. He handed me the juice, and smiled.

* * *
Ethan's own little language is full of syllables and guttural noises that are decidedly un-English. I enjoy testing his vocabulary, having him prove to me that he knows words he can't yet speak in a way that I'll understand. But I do know the many meaning of "beee!": Balloon, ball, bunny, and sometimes apple. And "ba ba!": depending on the inflection, this means either bye-bye or bad boy (in reference to Cody—Ethan is paying close attention, it seems). "Da!": dog. And I swear that he once said "ssk ssk" after I said "icicle."

Just a few days ago, we were looking at a book and came upon a picture of a banana. Ethan took the book from me, shoved if forward and nodded his head vigorously. I went to the kitchen and got him a banana, which he devoured.

Tonight I was being lazy, lolling on the sofa, while Ethan was fiddling with his various collection of toys (old makeup brushes, empty containers of all ilk, toddler toys whose dying batteries have reduced their chipper sounds to mournful moans). The front door was open, letting in a glare. "Hey, Ethan, will you close the front door?" I asked.

And then, he did.

* * *
Yesterday, as we were inspecting our vegetable plants, Ethan became interested in the small but ripe Cherokee tomato that was ready for the picking. I took it inside and rinsed it off, then cut it in half and handed it to him. I watched as my son experienced his first taste of a home-grown heirloom tomato, still warm from the sun. And then, he reached his little hand up, and offered me a bite.
at 17.7.09

He is such a clever little guy. Poppy misses playing with him. But considering the "stock" he came from (and I also will include Erin and Noah in there), it doesn't startle me at all at his brilliance! :-)
Dad

ah, that age is so great.

thanks for stopping by and suggesting a few books! :)

Enjoy this time - it's the perfect time in between babyhood and toddlerhood where you are their whole world, but they're starting to explore and share with you - I'm enjoying it now (for the last time!) with Jason, I hope it never ends -well, not really :)

I guess now is as good a time as any to tell you that I found out 2 weeks ago that I'm pregnant. (!!! Squeal!) =) I'm only 9 weeks along, so we haven't told many people. But this post made me want so badly to tell you! My husband and I are delighted, and I always show him Ethan's various escapades on this blog. He's going to love this one. =)

Blogging about it soon(ish). Been on small hiatus as I organize my thoughts. Still reading, though!