These things kept me awake last night, so far is the extent of my crazy

I’ve been a fidgety mess for days, and it’s David Sedaris’s fault. Well, it’s not really his fault. It’s also the YWCA’s fault.

I also joined our city's new YWCA facility (which is awesome), which presents a whole new set of issues to concern me. First, do I have to call ahead to attend classes? And if it's a yoga class, do I have to bring my own mat? Am I a bad mother for taking Ethan to the nursery while I take part in various sporty activities? What is an "x bike"?

Most of these concerns could be addressed by asking some friendly worker at the counter, of course. But that reality does nothing to quell my irrationality. I think it has something to do with being in close proximity of locker rooms.

In other news, Ethan said his first two-word combo this weekend: hot dog. Or rather, "ott daw." I also believe he's been body-snatched by some alien lifeform whose most marked qualities are sarcasm and aloofness. 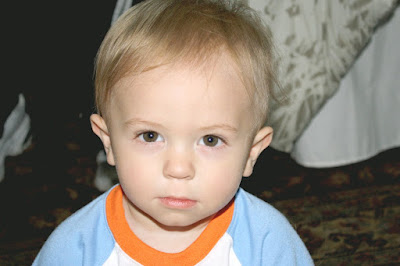 My suspicions were piqued after he fake laughed a number of times, an activity that includes opening the mouth wide, sticking out the lower jaw, and with little to no mirth expelling a loud "AH HAW!" Obviously this has done nothing to aid my current paranoid and insecure state of mind.

Email ThisBlogThis!Share to TwitterShare to FacebookShare to Pinterest
Labels: (un)Fitness, family, Hadrian's Walk, Whose Body Is This? Disease, writing career

Hah! I would be obsessing over those SAME THINGS, were I in your shoes. Cold comfort, I'm sure ...

It is a good thing that insecurity can lead to perfection.

Funny post over at the guest blog--and triathlon training can be fun...right?

i'm so jealous! dang. i'd be nervous too.