An Evening With Greatness, Part 1 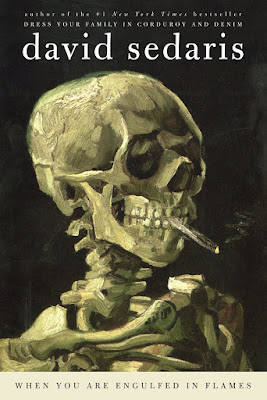 I considered it a test of fortitude. What about the time you gave birth? I said to myself. That took a whole twenty-six hours. Sure, I replied, but in that situation you didn’t have a choice. This! This is the real test of fortitude.

David Sedaris began his bookstore reading at 7, and I considered myself really clever for arriving at 5:15 to get a good parking spot. Then I sauntered over to the nearby Italian place for a meal that was pretty good, but on reflection was really only so-so when I learned what it cost me—a price that turned out to be far more expensive than the fifteen bucks I paid for dinner.

Apparently, David Sedaris is sort of a big deal. The bookstore staff, in preparation for His Big Dealness, ordered numbered wristbands to give fans as they arrived, a fact of which I was unaware. And because they didn’t know I had arrived at 5:15, they insisted on giving me a wristband with a number suited more to an irresponsible fan who wandered in around 6:30, or one of those voyeuristic people who follow crowds just to see what’s going on.

“No, no. I’m a HUGE fan. I was being clever, you see,” I explained, to no avail. These bookstore workers, they are made of steel. I pursed my lips and wrapped the electric-green band marked #324 around my left wrist.

The bookstore is expansive—one of those chain retailers that devote half the square footage to various cutesy bookish accoutrements (reading lights, novelty bookends, day calendars with attitude) and the all-important revenue platform: the coffee shop. Still, I knew exactly where the reading would be held without needing to be told—which was a good thing, since the bookstore staff weren’t all that forthcoming with information, as evidenced in the numbered-wristband debacle. Armed with my knowledge and my self-righteousness, I headed straight for the least-visited, most open corner of the store: Christian Inspiration.

I knew I had found the right place when I saw the casually smoking skeleton hanging out in Spirituality. And also when I hit a hot wall of people by the time I reached Teen Lit.

The thing about His Big Dealness is that physically he isn’t very big. The only glimpses I got of him were when the frizzy-haired lady in front of me shifted her weight for a few seconds (probably to let the occasional anonymous fart pass through the crowd—apparently mob scenes cause some people expel nervous gas).

The other thing about His Big Dealness is that he’s very generous with his time. If you’ve come to hear him read and wait to get his autograph, he will actually ask you questions and chat for a minute or two. This quality, I came to learn, is best appreciated by wristband numbers 1 through 50, and the appreciation diminishes as the number of your wristband increases. As wristband #324, I began to consider Sedaris’s sociable candor a really serious personality flaw.

At the two-hours-waiting mark, I still clung to both hope and positivity. Why don’t you write down your story, I said. Yes, that’s a great idea. So I tore a page from the back of my Moleskine and wrote down the story about breast milk I was going to tell David. (He asked specifically for breast milk stories at the end of the reading—he had his reasons, and I really can't go into them at the moment—and I thought he’d enjoy hearing about the time breast milk led directly to my backyard neighbor seeing me naked from the waist down.)

As I began to write, I became convinced that this personally penned note would solve my problems. If you really must go, I said to myself, worst-case scenario is you ask a bookstore worker to pass this story to David before he leaves, and he’ll be so impressed that inevitable fame and fortune will befall you in short order.

In hindsight I realize the idea came directly from Self-Defeating Erin, because only Self-Defeating Erin would entertain the possibility of giving up at all. She is a crafty one, cloaking her objective-thwarting schemes in the notion of fortuitous success. In that case, it might actually be better if you leave, somebody thought (at this point, I really couldn’t say who).

By three hours into The Great Fortitude Test of 2009, the excited squeals of wristbands 115 and 116 as they approached the table were a direct insult. I sulked, offended-like, and defiantly put my feet up on the chair in front of me. I was just yards away from the man himself, but still I was separated by hours.

You could just leave, you know, whispered Self-Defeating Erin. You’re not in college anymore. You’ve got a baby and a warm bed waiting for you at home. Plus, it’s cold in here! It really was cold.

It really is cold, I said to myself. The crowd had dispersed (wristbands 1 through 50 having left for the night with their precious freaking autographs and memories, the rest of us poor saps milling about the store), and I sat shivering in the rows of seats reserved for those now-absent Chosen Fifty, engulfed by the blast of conditioned air that no longer had a gathered mass of human flesh to cool. Why don’t you go get a coffee to warm up and stay chipper? I thought. No, that would be cheating, I replied, or at least I thought I had replied, but now I realize that it was Self-Defeating Erin who said it. Only Self-Defeating Erin encourages me to make the task at hand more difficult so as to be prouder of the reward.

Not getting the coffee was the first of several imperceptible steps toward the door.
at 24.6.09

I'm totally obsessed with His Big Dealness too. The first time I read Me Talk Pretty One Day I was on a plane and I had tears rolling down my face. I swear everyone thought I was crazy.

I started reading his stories after my 6 year old was born and I have to say that it greatly helped me get through the post partum. My husband bought me a reading light (one for my head no less)so that I could stay up reading at night. BUt I would wake him up from shaking the bed from laughing so hard. I'm jealous you got to see him! BUt what happened? Did you stay or leave? I really couldn't tell by your last sentence but it sounds like you left! Maybe your breast milk story will make it into one of his books one day. But now I think you need to tell that story on here.