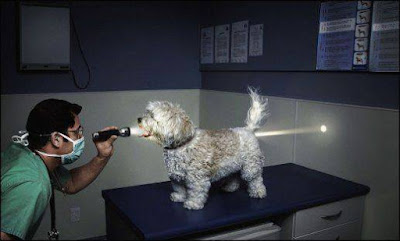 Adding pets to one's family tends to make animal lovers become even more sentimental. I mean, have you seen The Dog Whisperer? Otherwise mature contributors to society—adults! over-the-hillers, even!—allow their dogs to completely dictate daily life, so much do they displace emotions inappropriately humanize love their pets. Not so for me.

Since adopting Cody, I've been forced to become less sentimental. I should have known when, on the ride home the day we adopted him, he barfed in the car then helpfully tried to clean up by eating it. Nevertheless, I tried to play mommy to him, even rocking him gently before placing him in his kennel at night. Within weeks, Noah threatened to give him back if I couldn't get a grip on my I'll-never-be-a-good-mother-because-I-can't-even-handle-this-dog kick. Obviously, we kept him. Even after he ate our secondhand couch—literally. Noah hacked up the remains with an axe to dispose of it in the dumpster at our apartment. The couch, that is. Not the dog.

Since then, countless objects of my nostalgia have found their final resting place in Cody's colon. It doesn't help that he has an uncanny tracking ability. Once when he was still a pup, we came home from a trip to the store that was staged so as to provide Cody the opportunity to display his experimental self-control skills. He didn't destroy anything that time, but while we were gone he located eight slippers and brought them into the living room. He found slippers in a matter of thirty minutes that I hadn't seen in years, slippers I didn't even remember wearing.

For the most part, his chewing habit has been pretty under control. With the exception of certain irresitable contraband—baby socks, food wrappers, the occasional cat dropping—Cody has been the picture of doggy perfection.

Until the other night. "Nooooo Cody!" I heard Noah yell from the bedroom. And it could only mean one thing: Our new sheets. Sure, I got them on sale for $38 at Walmart. But they're Egyptian cotton! They're a (relatively) high thread count! They're only ONE OF TWO SETS OF SHEETS THAT WE HAVE THAT FIT OUR BED. And now both sets have top sheets defiled by the jaws of Devil Dog. 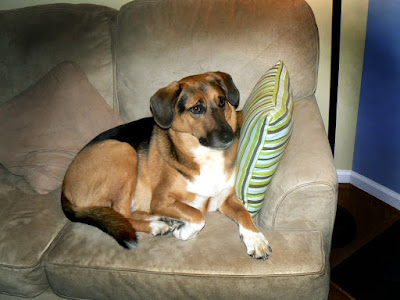 Just cuz he's sittin there all Pottery Barn Dog Model, don't believe it for one second.
Still, when he cries outside the door so he can visit me while I'm in the bath, I can't help but love the fur monster. At least until he starts drinking the bathwater.
at 1.7.09

We had two dogs before we had children. But they started growling at Evan when he was a baby so they had to go "to new homes, not "to live on another farm").

Not that all dogs are like that obviously, we had just not trained ours very well and they were of the opinion that they were the top dogs. My dad has one of them now and she's very happy indeed. the other one went to someone we don't know, but we;ve heard reports he's doing well.

Mmm hmm. I hear ya. Luckily (I guess) all Isabel is interested in eating is her OWN poop. While disgusting and puke-inducing, at least she isn't chewing furniture or mommy's work shoes.

And I shouldn't say ONLY her own poop. Once we got Lily, Isabel wasn't eating her dinner any more and I made the connection when there was never any kitty poop to scoop from the litter box. Yuh. We got a covered one. Nasty.

I like reading dog stories so I'm reminded of why I don't want one :) Love that first pic!

how bout 3 cats that sit on the side of the tub and watch you bathe? i just know they are saying "does she know she looks like that?"

Our 14-year-old cat's current favorite activity can be summed up in two words: Floor poops. Do I love her any less? Not a chance.