It came like a lightning bolt from the sky 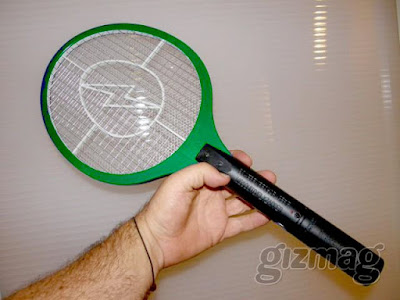 My dear friend Tony, who's saving the world one spreadsheet at a time in Baghdad, informed me that he recently purchased "a tennis racquet with an electrical current running through it that you can use to swat mosquitoes out of thin air. It makes a very loud POP and a very bright spark when you make contact. It's a beautiful thing. FANTASTIC even. The only problem is I'm always afraid I'm going to knock something over or break the zapper with my mighty Bjorn Borg-esque swats." Suddenly I had to grip my desk and keep from fainting, the post-traumatic response hitting me hard.

You see, one Friday evening when I was in high school, a group of my guy friends invited me to go with them to downtown Naperville (for those of you who aren't familiar, Naperville is a semiswanky neighborhood in The Chicagoland Area, and no, I did not make that up). Cool, I thought, this sounds like fun. That was mistake #1. These are guys who, for a Halloween IN CHICAGO stripped down to only shorts (no socks even), wrapped towels arounds their waists, and trick or treated like a football team who had just hit the showers (actually, some of them were football players, come to think of it). These are guys who, for my 16th birthday, bought me a huge, smelly couch from Goodwill and delivered it to my front porch. These are guys who gave their parents a lot of gray hair.

(For a while, Adam was actually banned from Josh's house after he called Josh's mom and told her he had been arrested. It should tell you something about these guys that it didn't take much convincing for her to believe him. Josh is a doctor now, by the way.)

However, when we got to downtown Naperville, they went to the trunk (all five of them) and donned various and sundry pieces of sports gear (from mosquito nets to hockey pads) and passed out cans of bug spray and tennis racquets. "What are you doing?" I asked, the reality of my predicament suddenly sinking in. "Mosquito duty," they said.

I was once at a party where a boy had somehow aquired a tazer and they guys were tazering eachother. Uh, I think I'll pass. Thanks.

These guys sound like fun! I lol'd at your flashbacks to the point where G asked, "What's so funny?" I re-read it aloud to him and the humor didn't escape him either. And I'm pretty sure he's stealing that Halloween costume idea for this year. That mosquito racket looks like fun--I may need to get one!

Yeah, that pretty much sums up the Naperville C of C youth group...how we all made it out alive and with no criminal records I'm still not sure