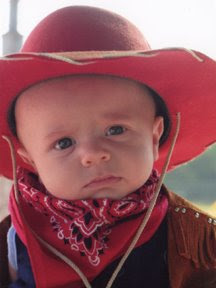 I bought Noah Be Prepared: A Practical Handbook for New Dads for his first father's day last year. Aside from such useful information as how to make your baby laugh (one subheading was Dad Acts Like Moron) and how to jerry-rig a dishcloth, a sock and some duct tape into a diaper, MacGyver-style, it has a section on taking your tot camping. Not long before I got prego, we had bought a tent and some sleeping bags and ventured forth on our first real camping trip. Aside from the time our friend nearly cut his thumb off and had to go to a backwoods "hospital" in West Virginia, we actually had a great time. But I digress.

The real moral of this story is the book section on the Decoy Drawer. The Decoy Drawer doesn't necessarily have to be a drawer; any red herring setup can count. The point? To allow your curious cowpoke to feel like he's livin' on the edge, fiddling with grown-up stuff that he totally digs but shouldn't be allowed to touch: cell phones, for instance, or wallets full of important plastic cards to take out and feed to the dog.

Our Decoy Drawer is actually a small wicker basket on a low shelf by the front door. Above the shelf on the tabletop is where I keep my purse, and above that are hung our jackets. Above those are the portraits of Ethan, age 3 months, "riding" a pony at daycare and looking as John Wayne as a quarter-annumarian can. 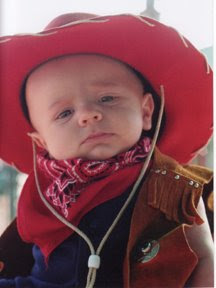 Here's a list of what's been seen in our Decoy (Basket) Drawer:

Any number of non-functional devices (useless remote controls, unused wallets) are excellent candidates for not-so-contrabandy contraband. We have other Decoy Areas throughout the house (an old makeup bag in my bathroom with empty or out of date items, the pots and pans cupboard in the kitchen).

All you parents of babies and toddlers, allow me to paraphrase the wise old sage Woody from Toy Story: 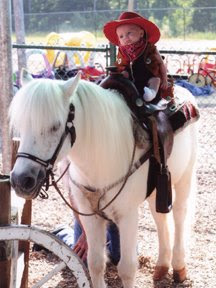 Pay no attention to the man behind the pony.
Decoy Drawer. You don't have one? GET one.
at 9.3.09

awww jeez...he IS john wayne! I love it! and the decoy drawer? wonder if i could make one of those for my 20 year old son??

I must bring in my photo to share with you, our horses look related. ha-ha

Oh and in my world we refer to these "decoy drawers" as "junk drawers" - ya dig? =O