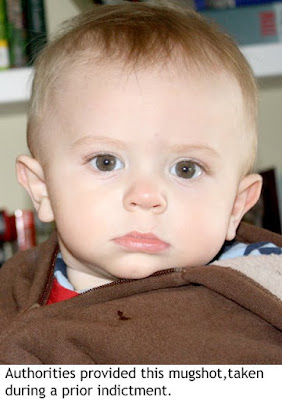 A recent and baffling increase in missing items has led a local dog to turn on one of his own and report his suspicions that the household baby is to blame.

"He's constantly touching my stuff," the dog, who requested that his name be withheld, seemed to be saying through an exasperated facial expression. "Why wouldn't I suspect him of taking my property when I'm not looking?"

Renowned local hero Officer Mike Honcho was originally assigned to the case, but resigned his post when his close personal involvement was brought to light. In a startling twist, Officer Honcho was revealed to be both the dog's owner and the baby's father. Officer Honcho declined to be interviewed.

"I have proof that this baby has played with my Nylabone," the dog insisted with a well-timed perk of the ears. Upon being asked to provide the alleged incriminating evidence, the dog merely tilted his head quizzically. When probed further about allegations of his own criminal record, which includes a long list of such misdemeanors as chewing bed linens and sneaking food off the stove top, the dog sighed huffily and refused to continue speaking to reporters.

During a press conference, in an official statement released by his representative, the baby stated: "Aii gee aii. Bwan dee."

Household cat Sophie agreed to weigh in on the matter, but proved uncooperative by refusing even to make eye contact. Household cat Zoe could not be reached for comment.

Authorities have confirmed that the baby will be watched closely, but remains at large until such time as hard evidence is discovered or reliable witnesses come forward.
at 2.3.09

And ohmygawd what an adorable baby face!

The poor dote now has a record
Poppy will bust him out of the joint!