All in a day's work

Nothing puts a damper on dinner plans like seeing your husband on the news crouching behind a tree wearing a ballistic helmet and holding a shotgun in broad daylight on a residential street.

Cops don’t talk to reporters for a lot of reasons, and most of them have nothing to do with personal animosity. Yesterday, after the S.E.T. team arrived, Noah pulled back and started monitoring the line, where the reporters were gathered. Of course, ever doing their jobs, they tried to get information from him. Certain things he couldn’t share, but the ultimate reason why he wouldn’t talk to them? He was concentrating, and talking to them would have been an unsafe distraction. Another reason? In their desire for a scoop, reporters can broadcast information that can compromise in-progress operations or continuing investigations. 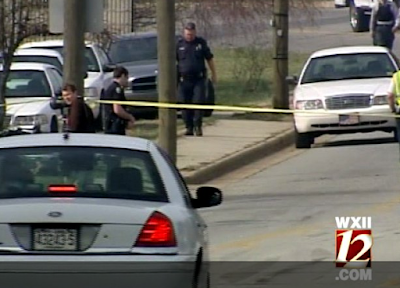 Ten points if you can find Noah in the picture above. 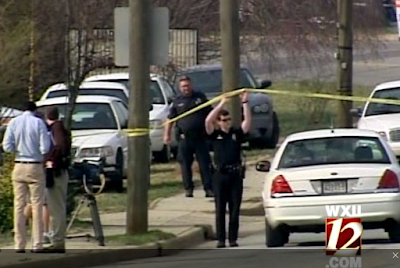 See that handsome officer holding up the tape, turning pink in the sun? That's Noah.
And as is always the case when the police are involved in anything, people jump to conclusions and make accusations based on personal bias and the teeny tiny bit of information that they’ve caught on the news. Some citizens have marveled at how something like that could happen in such a “nice” neighborhood, while others assumed the outcome was positive because it happened in that neighborhood, and not a poor one or a minority one. Yet others deemed the police response “overkill.” (Click here to see some responses to the news article posted by the Journal.)

Here’s the insider story, the one the newspaper will never run. Those guys out there yesterday are our friends, and they’re members of the very community that they police. More times than not, they shoulder the burden of protecting us from ourselves. And I can tell you this: In a situation like a standoff, they don’t see race or the nice neighborhood; they see an out-of-control subject with a weapon. They see an ever-evolving moment in which they must constantly reassess the climate, hoping that he won’t level that gun and force the split-second decision: Him or me? Because they will choose him, every time. They will always do what they have to do to go home, and anyone who would fault them for it ought to consider the alternative. Or go one better, and lobby for the city council to cancel their contract with the police. That's right, folks. Whether a city or town has a police department is at the discretion of the city council. For all the criticism and vitriol aimed at police, I think you'd be hard-pressed to find anyone who would vote to get rid of them.

That young man had numerous guns pointed at him by officers who are trained to draw and fire two fatal shots in under three seconds, and not one of them got jumpy and pulled the trigger. I can guarantee you that race and class don’t enter the equation, and that they would never gamble with an unstable subject because hey, he’s white, or gee, it sure would be a shame to mess up this pretty house. Bull crap.

I don't know what that boy was thinking or feeling or dealing with to cause such a break from normalcy, but yesterday could have been his last morning. It wasn't, thanks entirely to those police officers, my husband included. I'm sure his parents, his father who spoke to his son over the loudspeaker and his mother whom Noah had to restrain, appreciated how the police handled it. I was just as worried about that boy and his family as I was about Noah and his friends. They are trained to neutralize hostile situations, and yesterday they did it without bloodshed. Such stories rarely end so well.

While the disturbing situation unfolded yesterday, a mistrial was declared in the murder trail for one of Noah’s longtime school friends, Terrell. A deadlocked jury, 11-1, guilty. When faced with determining a life sentence, Juror 9 just couldn’t pull the trigger.

Noah and I, we don't fit the mold. We're liberal thinkers, more Democrat than Republican, heck in the past we've even considered Pacifism and mission work abroad. But life took us elsewhere. And so this morning Noah got out of bed at an ungodly hour and put on his uniform yet again, as he would have no matter the outcome of the standoff.

Who knows what tomorrow will bring.

(Check out the video and slideshow on WXII news, from which these screen shots were taken.)
at 12.3.09

One of your best blogs yet. So passionate and true. Thanks for sharing this.

Wow, there is so much that I've missed guys. What an awesome post Erin -- I couldn't agree more.