On our way home from the store, we'd pushed Ethan to his limits. He had had enough, and he wanted out. We began singing, and to our shock and surprise, he actually stopped crying. That's when I realized I don't know many songs in whole (just a lot of choruses), and the ones I do know in whole relate either to Christmas or Mariah Carey in the early 90s.

We sang an extended version of "lullaby and goodnight" (most of the lyrics were "go to sleep, go to sleep, go to sleep little Ethan"), then moved on to Charlotte Church's version of "All the Pretty Horses," then "Rockin' Robin," then "Jingle Bells," the ABCs (with a seamless segue into "Twinkle, Twinkle Little Star") a remix of "Proud Mary" and "Respect," and a final (and not a little triumphant) duet rendition of Mariah Carey's "Hero," which I still know in its entirety, because I was a member of one duo among three others that auditioned to sing it in the third grade talent show.

I looked back, expecting to see Ethan asleep since he hadn't made a peep through the whole song. Instead, I saw something akin to this: 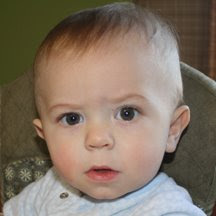 If the kid can't appreciate fine music (and it doesn't come much finer than Mimi), perhaps you don't want to be seen with him either?

Anne--you have a point. He and I have had a number of run-ins these past few days. The "What to expect" book says this is him gearing up for independence. I had to sternly tell him no last night, and he looked at me like, "Huh. That was unexpected." I'll take this time to perfect the phrase, "You're GROUNDED."

that picture just made our evening.... :) -julee

Funniest thing I've read in a while! OMG, that picture owns me!!

Very funny. You hit every syllable on the last line of "Hero", I'm impressed. My kid is Ethan too. He's just hit the threes, whooopie !!!! Love your post.