Baby Jokes: A Study in Absurdism 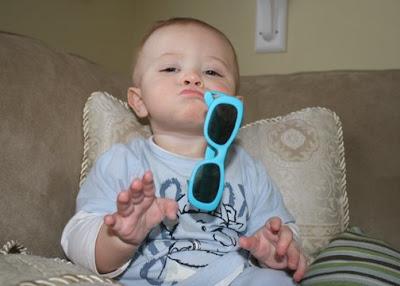 A PhD student in one of my classes has a son who's just a month younger than Ethan. We've become fast friends, because guess what? We're new parents and we like to gush and we can safely gush to each other without wondering if the other person is just pretending to seem interested in teething woes, and would really rather get back to the many woes of post-structuralism.

In our last session of class, we discussed Foucault and Barthes and Arnold, and about the Great Jokes of the surrealists. On break, Mercer came over so we could share photos of the lads, and then said that all our talk of non sequiturs reminded him of Baby Jokes. His boy's latest Baby Joke is taking his pacifier out and putting it in Daddy's mouth, instead of the other way around. Daddies don't suck pacifiers!! [hysterical baby laughter ensues]

Ethan tells a couple of Baby Jokes, and they're doosies. I've already mentioned the fake sneezing. It's almost reflexive now; the other day he was in the office and Alissa sneezed, and he responded with a "sneeze" not two seconds later. But no laughing. Apparently we're over that one. Although he has recently presented a revised version that includes throwing whatever he's holding while sneezing, and that interpretation of the ol' faithful still draws a toothy, mischievous smile.

Ethan's latest joke is taking rings from his stacker toy and hooking them on his feet. It actually happened by accident when he was playing last weekend; he laughed hysterically--that ring doesn't belong on my foot!!--and kept himself entertained for a solid five minutes by taking it off, putting it back on, and chuckling to himself, genuinely surprised at the hilarity of it each time.

And what would a baby's joke repertoire be without naked crawling? There is simply nothing more amusing in this world than crawling away when Mommy or Daddy (or both) are trying to dress you after a bath.

The best part about Baby Jokes? They are always unequivocally, indubitably, undeniably...funny. 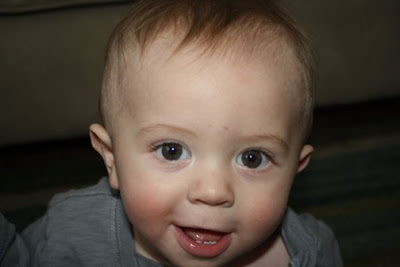 Email ThisBlogThis!Share to TwitterShare to FacebookShare to Pinterest
Labels: Back to School, Ethan, parenting

Who is the bestest baby photo takerer in the world you might ask? That would be Poppy!! You are welcome "Oh collective world" for my bringing such joy into your lives.

Dad (aka Poppy, the bestest baby photo takerer in the world!)

yes they are! i'm working with babies/toddlers right now and i laugh all day.

Maddy was easily amused by peek a boo. She even played by herself with her crib mirror. It was a bit disconcerting the first time to hear her giggling at nothing.

PS - thank you for your comment on my blog. I am glad to know that your community has a no-chase policy.