Last night, while cozied up in bed (awake later than I’d planned, because I slept in until 11 after stumbling back into bed after a 5:30 a.m. roundtrip drive to the Charlotte airport), I read a couple chapters of Good Roots, a book about Ohioans who are also writers, reflecting on their childhood experiences. My mentor, Lisa, edited the book.

I lay in bed, a warm dog the size of a third grader nestled by my legs, feeling nostalgic for Ohio, though I’ve never lived there and have only driven through it. And suddenly a breath-catching ache compelled me to sneak into Ethan’s room and watch him sleep. After a couple of minutes, even that wasn’t enough to dull the melancholy, so I did what you’re never supposed to do: I picked up a sleeping baby. But he didn’t waken. He just curled himself into me against my abdomen, in the shape of a child who while he sleeps still remembers being inseparably bound to his mother, allowing me to cradle him and brush my nose against his fragrant little head, caress the perfect skin of his cheek. (A recent development is that Ethan prefers to be inseparably bound to me during his waking hours as well, preferably within four or so inches of my face, dangling from my neck with his chubby hands tangled in my hair.)

Holding Ethan anchored me in the present, forcing me to feel what was only natural as we rocked in the dim glow of a night light: This is where I belong.

A repercussion of having lived in many far-flung cities, my closest friends and family have put down their roots around the globe, roots too deep to transplant without some unforeseen disaster—a layoff, a death—forcing the issue. For as long as I can remember, I have missed someone or someplace, and consequently wondered if I was in fact in the right place myself.

When Kim visited for Thanksgiving, we reminisced (she and I have been a set of best friends for as many years as I was old when we first met in Chicago), we commiserated, we laughed. I think we also felt a little sad, because I’m here and she’s there. Her fiancé is being groomed to inherit the family business, so their life is bound to where they are, certainly for a long time, if not forever. Although we don't have something quite as concrete as a family business to hold us to North Carolina, we've become party to the very adult truth that money, or the lack of it, can fasten you to a location with the inescapable weight of an anchor.

I was quite the homebody growing up; I was always a lot closer to my parents than many of my friends were to theirs. I enjoyed spending time with my family. So it's been hard to be far from them, particularly now that we have Ethan.

In my last post, I responded to Sarah Von's comment, saying I sometimes wondered if we wouldn't all be better off in Canada. That irritated Tony (Army man that he is), but I didn't mean it like that. I didn't mean to sound like the pompous American who doesn't appreciate all that I have. I think it's just natural to think that being someplace else would solve our problems. At least it's natural for me to think that, me whose longest stint in one single place was 8 years (L.A., from age 5 to age 13), and who can imagine life being perfect if only...my parents lived around the corner...my extended family wasn't stretched from New Mexico to Northern Ireland and beyond...my closest friends and I were still able to see each other numerous times a week, instead of maybe once a year.

After I put Ethan back down in his crib last night, I went into the living room and read some Henri Nouwen (Intimacy, to be exact) by the white lights of the Christmas tree until Noah got home.

If we could look at our daily life from above, we might wonder what we are so busy for, so excited about, so concerned with. ... And if there is no real answer to this question, the most honest reaction might be: boredom. ... Boredom is the disconnected life...which so easily leads to depression. ... And certainly, if we have finished school and have a family and a job, this feeling of deep boredom might overwhelm us with the question, "So what?" ...

It is in this perspective that a mature, religious sentiment fulfills a creative function. Because it has a unifying power, it brings together the many isolated realities of life and casts them into one meaningful whole. ...

This new perspective is what we can call faith. It does not create new things but it adds a new dimension to the basic realities of life. It brings our fragmented personality into a meaningful whole, unifies our divided self. It is the source of inspiration for a searching mind, the basis for a creative community and a constant incentive for an on-going renewal of life.

For all the questions and wonderments and what ifs, I have Noah and I have Ethan. And where they are, to me, is home. 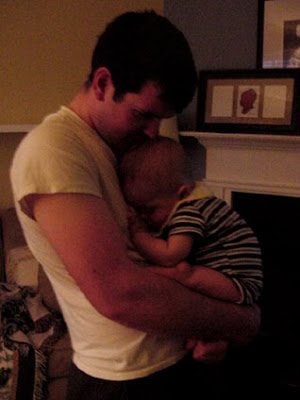 I heard Garrison Keillor mention that book on his radio show one Sunday as I was driving home from church. He read an excerpt from the guy who grew up in Hudson, which is only a couple towns over from my glorious hometown of Cuyahoga Falls.

What made you melancholy in the first place? Just wondering.

Oh you know, the usual melancholy that tends to surround the holidays, just reminiscing about wonderful past holiday seasons that if you actually examine it were classic movies, not your real life.