Did you really just say that? Or, Life Lessons from oh-eight

Cram a fiesty octogenarian granny, a middle-aged but energetic and beautiful Nana, a young and svelte new mother (all three hopelessly Irish in temperament), two excruciatingly laid-back men, a 20-year-old male college student, an elderly short-legged formerly obese beagle, a 65-pound beagle-pony hybrid, two snarky cats, and a 10-month-old baby into a three-bedroom house for seven full days, and “Did you really just say that?” could sum up the entire experience.

Although my dinner-table shocker as Twittered about held the lead for most ridiculous statement (apparently 20-year-old male college students don’t care to know what pregnancy does to one’s nipples), it was overtaken by my 83-year-old grandmother who, while watching us play Guitar Hero World Tour, leaned over and asked “Is Noah supposed to be grindin’ and slidin’ like yer man on the TV?” I can’t even remember how I responded. I’m actually not certain that I did.

Here are some of the runners up:

“I prefer nuts in my crackle. That’s what she said.”

“Are you going to tell Noah about the paint on the dresser before or after we leave?”

“I didn’t destroy anything this year. Although last year I set a fire.”

“Are you going to shower for Christmas?”

If ever you’re looking to hear something truly outlandish, I suggest obtaining an Irish grandmother. I particularly enjoyed Nanny’s lengthy exposition on The Thornbirds DVD set she received, culminating with the assertion that Richard Chamberlain was not only wonderful but also, as revealed in the gossipy whisper of confidentiality perfected by her generation, “gay.”

Most of this holiday season’s hijinks, much like last season’s, revolved around people damaging or breaking things in our house (a consequence of weeklong sardine living), but Noah pointed out that it’s not a raw deal. The ’rents pay for all of the groceries while they’re here, Dad does the majority of the cooking, and we usually end up with some household item Dad brings home on one of his grocery-store runs (usually out of guilt). This year we got a new trash can for the kitchen. Probably because Clyde kept tipping over the old one and rooting through the garbage. And also the cat food. 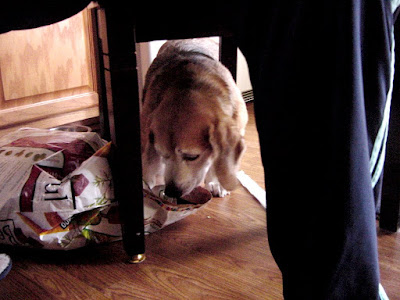 He’s still dieting, and doing really well on it, thanks for asking.

When not watching movies or rocking it out on Guitar Hero (I was the vocalist), Ethan entertained us with his many new tricks, including: clapping, fake sneezing, spinning in circles whilst on his bum, sitting himself up in the crib and playing with toys instead of napping, and dramatically chewing his food. He also kept us riveted by a number of false starts on the crawling front. Twice, he did a single crawl before collapsing into his typical Michael Phelpsian thrashing. But, as of day before yesterday, he has managed to push past the wall and crawl for a gain of up to 24 inches.

Everyone cleared out Monday morning, and luckily I had to leave for work before they were ready. Thus I didn’t witness the scene of the grandparents kissing their wee dote goodbye. At least this time it’ll be a shorter parting, since they’ll be back for the Ethan’s big 0-1 birthday in February. It is both cruel and merciful how quickly time can pass.

Remembering where I was this time last year (unmistakably pregnant, and pretty much where I am now if we’re talking literally, except I tended to arrive via waddle rather than walk), it’s hard to deny that this has been a year of challenges, but also breakthroughs.

January was actually a pretty crappy month. A friend’s brother unexpectedly took his own life, another couple we’re friends with lost their four-month-old son to a congenital heart defect, and a mentor within Behind the Blue Line (police spouse group) had her world irrevocably changed by a horrible accident that nearly took her husband’s life and has certainly taken away what they knew as normalcy. And then I was diagnosed.

February arrived, and soon after so did Ethan. 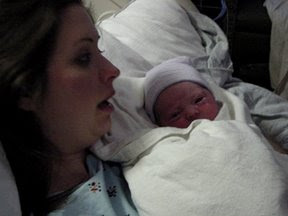 March through October was pretty much a blur of bills, exhaustion, illnesses and prescription drugs.

And then, Internet, I hit a turning point. For someone who loves to talk things over (and by talk things over I mean beat that horse mercilessly until it’s really good and dead), I can now understand why people going through tough times don’t want to talk about it. But now I’m better, and I can, so I'll just say it: I was treated for postpartum depression. And I think I’m becoming somewhat of an advocate for being open and honest about all forms of one’s health when ready, especially if doing so can help others feel less alone or broken or loathsome.

It’s so passé to say “I didn’t want to admit that something was wrong” or “I didn’t think it would happen to me,” but that is the clichéd truth. It took a discussion with my (fantastic, amazing, awesome) OB/GYN and a few meetings with a counselor for me to realize that, um, the wonderful and awful havoc that childbearing wreaks on a body is anything but underwhelming. And that’s not even mentioning the huge emotional challenges of deaths, considerable family worries, a major surgery, and having a husband whose job requires him to carry deadly weapons and leave the house for long periods at disadvantageous times.

Postpartum depression is not made up, and it’s not something to sneeze at, TOM. I, who avoid taking medications because I react so strongly to them, can’t deny the positives of well-regulated, responsibly administered psychiatric drugs. They do not solve problems. They restore balance.

So, dear Internet, I would like to leave you with one final statement, and though you might be skeptical, this one is not ridiculous: In 2009, pay as much attention to your mental health as your physical. There shouldn’t be a stigma associated with psychiatric crises, because our minds and emotions are key elements of our humanity, and who hasn’t at one time or another, as J.D. Salinger (who, incidentally, dabbled in Cruise’s beloved Dianetics) once wrote, felt your “mind dislodge itself and teeter, like insecure luggage on an overhead rack.”

Thanks to that doctor and that counselor (and a few other supportive folks, of course, as well as some pharmaceuticals), now my crazy is limited to near-compulsive tidiness and crafting. And that, I can definitely live with.

Well said (or written)! Happy New Year to you and your family!

Thanks for sharing your feelings about PPD. It will be helpful to others who go through it. I'm going to link to you from Postpartum Progress (http://postpartumprogress.typepad.com). Happy New Year!!

I'm extremely impressed together with your writing skills as neatly as with the layout in your weblog. Is this a paid subject or did you customize it yourself? Anyway stay up the excellent quality writing, it is rare to peer a nice weblog like this one nowadays..
Also visit my web site ; samson tobacco

This piece of writing is truly a fastidious one it helps new web users, who are wishing in favor of blogging.
Feel free to surf my homepage :: saggy belly