I was going through emails recently, and came across one I sent out a few days after Ethan was born. At the end of the email, I gave everyone the info to look up his hospital photos online. Out of curiosity, I went to the site, and they still had his photos up. So I ordered some. 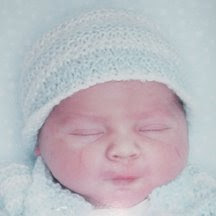 I went to pick them up yesterday, which as it turns out was Ethan's exact nine month birthday. I got to walk past the nursery and smile at the newborns. I got to see balloons floating behind half-opened hospital room doors and hear the squeaks of new babies and the shuffling of their utterly shell-shocked parents (who undoubtedly will soon be totally surprised by the adult-sized farts emanating from the bassinet).

This particular hospital isn't the one where all my bad health stuff went down. This is a two-hospital town. And you know what? I'm really glad for that. It's a rare thing to go to a hospital and have only the most excellent of memories. In fact, I hadn't been back inside it since the day we left to go home and introduce Cody to yet another small, interesting-smelling object that he wasn't allowed to play with. 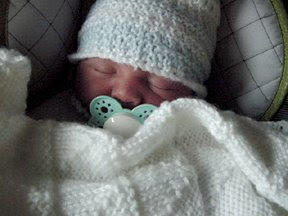 For those of you who are incredulous about childbirth being a pleasant memory, I have since composed a list of things that I find childbirth less horrendous than (such as wisdom teeth removal, heart-attackesque episodes, severe stomach viruses, the flu, being eight months pregnant for a whole month, etc.). Because the thing is, with labor you can at least see a light at the end of the tunnel. And so can the baby. HA! Get it?!? GET IT?? I know. Gross.

But seriously, who would have thought that three quarters of a year later, that squinty little amphibian-turned-mammal would have four teeth and a rather unpredictable sense of humor?

Dude. Clapping is hilarious. Also: that list of things that worse than giving birth? Good to know! That is a list that I am interested in.