I hope he never asks for a drum set 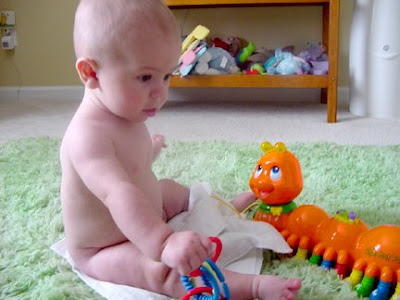 Someone gave us this Alphabet Pal caterpillar, which Noah wanted to get rid of while I was still pregnant, in fear of what it has now become: one of Ethan's favorite toys.

It has several settings: letters, colors, phonics, and music — one letter, color, letter sound, or song per foot — and its antennae light up when it plays. Not only does a push of the button on its back produce a catchy tune, pulling the string and making it move on its wheels causes Alphabet Pal to gregariously sing the entire alphabet song. Even better, if you pull the string again before he's done, he'll start right back up at the blessed beginning. A fact that Ethan relishes.

Now, the ingenious developers of this educational toy had the rather brilliant idea that each song played must have a title whose first letter matches the letter on the caterpillar's foot. Hence "London Bridge" for "L," "Yankee Doodle" for "Y," et cetera. And somewhere that developer is laughing his butt off because his kids are way past the age for annoying noisy toys. Well guess what, bub? I've got two words for ya: Rock Band.

On the particular day that this photo was taken, Ethan had a case of diaper rash, so we were (as the parenting books delicately put it) "airing it out." In a last-ditch attempt at entertaining him and preventing involuntary urination, we brought out the caterpillar and had a jolly good time trying to guess the songs.

We high-fived over the split-second identification of "Pop Goes the Weasel." And then we got to "Q." I naturally expected to hear Bob Dylan's "Quit Your Low Down Ways." But we were thrown for a loop when it instead played "The Celebrated Chop Waltz" for piano. Which from this day forward will be known in our household, simply, as "Qwopsticks."

Also, here is a photo of Ethan's tooth. I must announce that, as of yesterday, he has a second tooth right next to the first one. 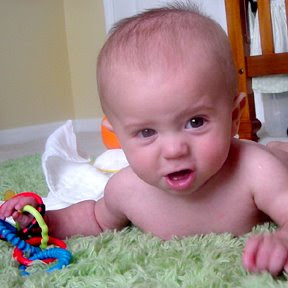 Hmmmm there's a lot of townsley in that wee dote of yours at the moment!

I am so getting Ethan a drum set for Christmas!