It was the best of times, but it was definitely more the worst of times

I’ll just be honest and say things have been tight, financially speaking, as of late. Daycare tuition nearing that of a private university and medical bills are main contributors. The other is a car payment.

We prided ourselves on the fact that we bought our first car together for cash. It’s been a great little car, very decent fuel efficiency, but it was our ONLY car. In this Ford Focus ZX3 hatchback we have achieved amazing feats of ingenuity and contortionism. 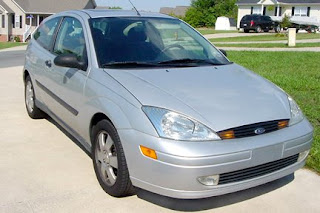 After nearly actually having a mental breakdown over precariously balancing three ridiculous schedules on four 17-inch rims and one postpartum brain (mine), Noah was finally convinced that we needed to bite the bullet and become a two-car family. Like most other families did right around the time Wally and Beaver Cleaver got their driver’s licenses.

The qualifiers for said second car were few: more than two doors, fuel efficient, slightly and gently used, not too expensive. After much online research and a few test drives, we settled on a 2007 Chevy HHR. Ours is a rare black-on-black edition. 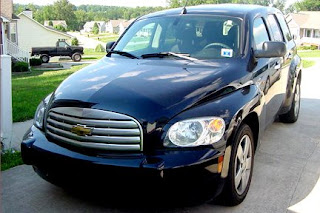 Feel free to ooh and ahh.

All that being said, our financial picture for the month of July went from Rembrandt to Picasso, so we’ve had to do some major reevaluating that will affect everyone. Some more than others.

None has been more affected than the animalian Etheridges. We had a family meeting explaining to them that there were going to be some major cutbacks. Namely, no more expensive Nutro food for a while. Noah literally laughed out loud when I came home with a kitty concoction called “Kit ’n Kaboodle.” Desperate times call for … a suspension of principles.

The cats have chosen to supplement their diet with various bugs from the backyard, and the occasional housefly. Cody has increased his protein intake by furtively eating cat poo from the litter box. Which I’m conflicted about, because although it’s a disgusting practice, we have less to scoop. The scales of justice will be tilting for a while on that one.

It was a shocking blow to realize that even we — we who have good jobs and no credit cards and only one small car payment — even we are not immune to the economic downturn in this country. Anyone who says the economy is fine should be punched in the face.

We’ll be making a lot of important decisions in the next few days and weeks. And we will also be accepting monetary contributions. To anyone who gives a donation, we’d like to show our gratitude with cupcakes, made with off-brand batter and baked in last year’s leftover Halloween paper goods.
at 8.8.08

Email ThisBlogThis!Share to TwitterShare to FacebookShare to Pinterest
Labels: adventures in domesticity, Cody, Noah, The Kitties