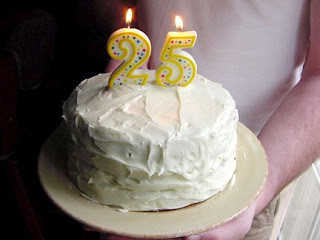 There were so many good things about this weekend, and I’m certain that all of them happened just because it was my birthday and the universe knew I needed some fun.

Noah baked a double-layer cake with frosting from scratch all by himself, and then cooked a delicious dinner. He also bought me Little Miss Sunshine (wrapped in Christmas paper — remember, we’re being resourceful now), which I love because in that movie the characters do exactly what you’d want to do but probably would never do in ridiculous life situations. And I’ve had a lot of ridiculous life situations lately.

One such minor one was on Friday, when waiting for over an hour in the bank to make a foreign-check deposit. What did I feel like doing? Taking my shoes off and throwing them the length of the bank, then scattering the bowl of conciliatory Dum Dum Pops all over the office floor. What did I actually do? Ate the conciliatory Dum Dum Pops. Although I did slouch dramatically in my chair.

On Saturday, The Day of My Birth, things were looking up. Jen and I went to the spa for my first-ever massage (which I enjoyed, but also worried the whole time that I’d be so relaxed a toot would slip out — which it didn’t, nor has that ever happened, probably because of my anti-toot vigilance) and a sassy pedicure. 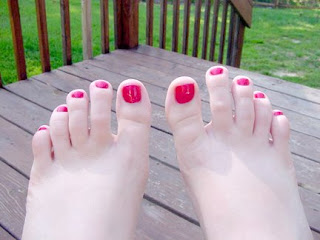 That evening, the weather was so pleasantly mild that we Noah did some work in the flowerbeds while I lounged on a lawn chair. I also enjoyed watching Noah chase Cody who was chasing Sophie the cat through our neighbors’ backyards as a brief but satisfying interlude.

But then our lovely evening took a horrifying turn when our neighbor came over to say she had killed a COPPERHEAD SNAKE with her lawnmower. Oh, and also they found a BLACK WIDOW SPIDER under one of their gutters. Apparently, Noah found one under ours too. I mean, I didn't realize that we were moving to the jungle when we bought our house. I literally have shivers. It’s enough to make me very afraid of our yard.

Fortunately, I was distracted by the Olympics, and as we all know the Olympic games restore balance and harmony to the nations. Evidenced by the bloody conflict between Georgia and Russia; the Chinese trying to pass off 12-year-old gymnasts as 16-year-old ones; and the French swim team trash-talking the Americans. Although how bad can trash talk actually sound in French?

A definite highlight for me, besides the riveting men's water polo semis, was hearing Bela Karolyi say “he-mongoose” instead of “humongous” in an interview with Bob Costas. There’s almost nothing I delight in more than a really good mispronunciation. As Noah knows, since he frequently mispronounces things. Like the time he mispronounced something, then tried to cover it up by saying it was just "a ploy on words." That was a twofer.

I especially love the dramatic bios that NBC does between events. No, seriously, I do. I almost always get teary, and not just because they use affecting music from movies like The Kingdom and Cast Away. Though I thought it was a bit of a reach when they did a couple of bios on two Chinese athletes — a diver and a gymnast — and tried to make their success the focus even though, oh by the way, they were both forced into their sports against their will. But look at their (state-enforced) dedication! The gymnast even begged her parents to let her come home. And the announcer was all, “Aren’t we lucky she didn’t quit?” Um, I think you mean, “Aren’t we lucky she was spiritually broken by her family and the government?”

Besides all that, I even finished two of my pillows.

All in all, I’d say my birthday weekend was a he-mongoose success.

Email ThisBlogThis!Share to TwitterShare to FacebookShare to Pinterest
Labels: Cody, Noah, The Kitties, the Southern experience