And just like that, his Olympic dreams were dashed

Cody, being large and long-legged, has a tendency toward the occasional bout of tendinitis. His personal trainer and I keep telling him to scale things back, that he's no good to anybody hurt, but he just doesn't listen.

Every few months, he'll be out gallivanting (usually chasing a Frisbee or the Kong), take a wrong step, and hobble back to the house immediately for an evaluation and quick massage. He beelines to me looking for comfort, like a child to his mommy. But I can tell that the poor guy is really uncomfortable. Actually, it would be hard not to notice.

When he's hurting, he becomes very clingy. Oh, and did I mention the clingyness? He has perfected the "I'm-not-feeling-sorry-for-myself-
I'm-just-soldiering-on-in-silent-pain" facial expression. And there is much petting of ears and scratching of bellies.

Not to mention flourishes of dramatic, inexplicable actions. Like curling his giant form into a ball on top of a pile of blankets, or tediously attempting to get up onto high places where he really doesn't belong (like the two-inch ledge on the back of the couch) for the sole purpose of proving that he just can't give up the fight, no matter how disabled he is. Like Kerri Strug with the bum ankle doing the vault in the '96 Olympics, or Curt Schilling with the bloody sock in Game 6 versus the Angels.

When the guy came to fix the air conditioner yesterday, Cody got caught up in his protect-the-house frenzy, slid on the wood floor, and re-aggravated his shoulder. So the evening was pretty much dedicated to pampering him, whether we wanted to or not.

I knew things were bad when he slept on the floor while I took a bath, literally touching the side of the tub with his butt. Then as I got dressed, he didn't stray more than three feet from me. He would keep stopping and turning around and looking at me like "Aren't you going into the living room yet? Because that's where I want to go, but nobody's in there to pet me and tell me I'm a good boy and talk baby talk to me. And that is unacceptable."

Once we got settled in to watch the Games, Noah just wasn't cutting it for Cody. Far too little attention was being paid, what with the pesky baby on his lap. So, per his typical dramatics, Cody somehow managed to gingerly perform an incredible feat of balance by coming over to my side by walking across the back of the couch instead of just jumping down. And then he proceeded to finagle his way down the arm and squeeze himself onto the four-inch-square surface area between my face and the cushion. 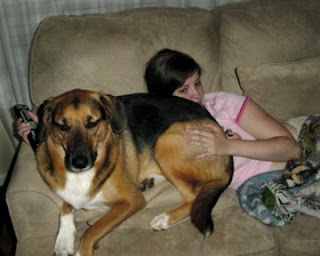 The best part about this was that I was totally settled, lying down with my head on the pillow, when he decided to arrange himself like this. I've always heard that "mom" is just another word for "jungle gym," but I did not expect to be crawled over by a malodorous 65-pound fur-baby with talon-like claws. 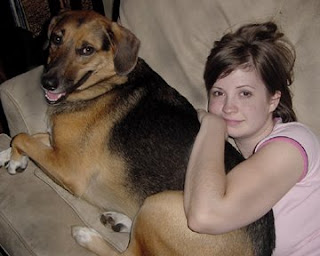 Hopefully he'll get past the heartache and realize how much he still has to offer. He's thinking about trying to give back to the community. Maybe doing some public speaking and charity work. For the children.
at 20.8.08

Email ThisBlogThis!Share to TwitterShare to FacebookShare to Pinterest
Labels: Cody